Marianne North, the eldest of three children, was born on October 24, 1830 in Hastings, England to a prosperous land-owning family.

At first Marianne wanted to devote her life to music. Art was her next fascination. Then she discovered a passion for botany. Her family, the author notes, just wanted her to find a rich husband. 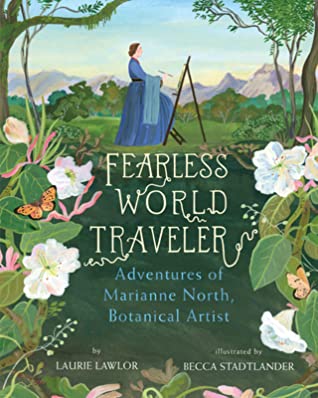 But shy Marianne hated the social scene with its rigid conventions. She decided to teach herself about botany whether her family would support it or not. Her plans were interrupted, however, in 1855 when Marianne’s mother died. Marianne, age 24, promised to take care of her father, which she did for the next fourteen years, never marrying but supervising his household and serving as his travel companion.

Her father died in 1869 – Marianne was forty – and only then did she begin to pursue her own dreams in earnest. She traveled around the world twice, by herself. She visited fifteen countries in fourteen years and saw every continent except Antartica. Wherever she went, she painted, sometimes for twelve hours a day, to record what she observed.

And that wasn’t all. The author notes:

“Sadly,” Lawlor observes, “in many cases her paintings are the only remaining record of rare species that are now extinct.”

As Marianne’s paintings accumulated, she wanted to share them, and offered to donate them to the Kew Royal Botanic Gardens, as well as to construct a special gallery in a quiet part of the gardens to house them. “To her delight, the Kew Gardens officials accepted.” 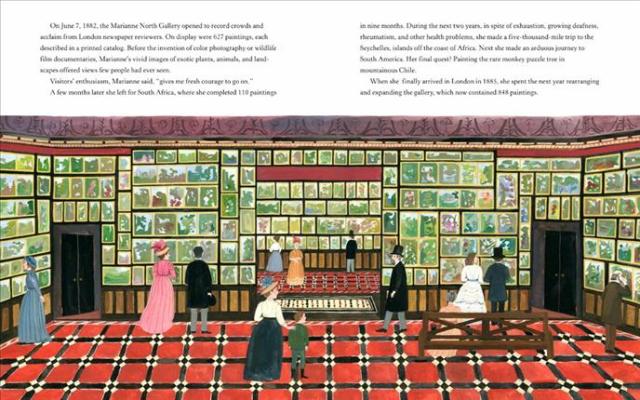 On June 7, 1882, the Marianne North Gallery opened to record crowds. A total of 627 of her paintings (the collection later grew) were displayed:

“Before the invention of color photography or wildlife film documentaries, Marianne’s vivid images of exotic plants, animals, and landscapes offered views few people had ever seen.”

Marianne retired to a cottage in the London countryside and wrote an autobiography, Recollections of a Happy Life. She died on August 30, 1890 at the age of fifty-nine after a lingering illness. 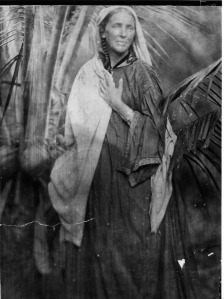 The book concludes with more information on Marianne North and her legacy, a list of resources, and a “Who’s Who: Some of the Scientists, Writers, Politicians, and Artists Marianne North Encountered in Her Life and Travels.”

Gorgeous, lush illustrations by Becca Stadtlander are full of detail.

Evaluation: This story shows both the restrictions upon women at the time and the courageous way in which Marianne managed to realize her dreams. She did, however, come from considerable wealth, enabling her to do what women with less resources could not. Both messages are instructive for readers, the recommended age for which is 6 and up. 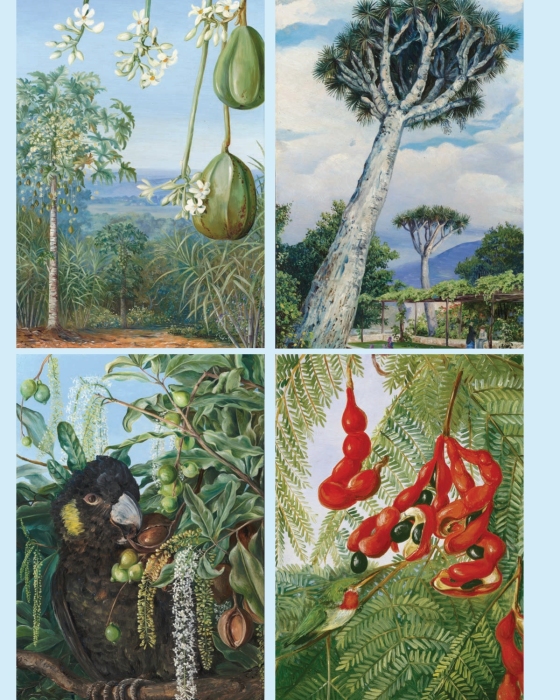 End page art in the book; illustrations by Becca Stadtlander