Review of “Mama’s Last Hug: Animal Emotions and What They Tell Us About Ourselves” by Frans de Waal

Ethology, the scientific study of animal behavior, can yield insights into similar human behaviors because of the absence of the use of words by animals for verbalizing thoughts or emotions. Thus there is no obfuscation stemming from self-serving explanations or interpretations, lies, manipulation, euphemisms, lack of self-awareness, ideological biases, or any other misleading verbal descriptions that may cloud the picture. Unfortunately, many people believe that animal’s lack of a language understandable to humans implies a lack of consciousness and especially, a lack of emotions. Primatologist Frans De Waal reviews evidence showing these are unreasonable assumptions. 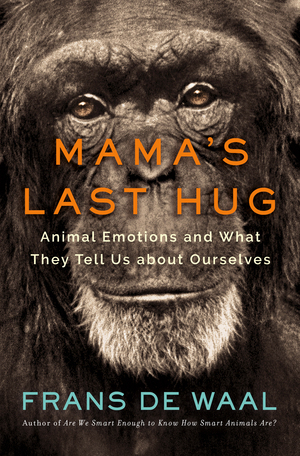 De Waal allows that our inability to translate animal sounds precisely means that we cannot always be certain of which emotions are being expressed by other species. But there are plenty of clues, including the ability to measure the hormonal output associated with emotions, such as oxytocin with affection, and adrenaline with aggression.

Scientists are also developing better experiments to assess animal “feelings.” The studies reported by de Waal that I enjoyed the most involved testing a sense of fairness and justice in primates, specifically in capuchin monkeys. Two monkeys were placed next to each other in separate areas divided by mesh, so they could see what was going on with each other. When both got cucumbers as rewards for completing a task, the monkeys seemed content, not acting out in any way. But if one got the preferable reward of grapes, the other rebelled, refusing to do the task and even throwing the cucumber chunks back at the investigators.

(You can watch a video of this experiment on youtube, embedded below, which appears as part of a Ted Talk by de Waal.)

Because of the important role of emotions in cognition, and the plethora of data about animals that would be hard to interpret without acknowledging emotions, de Waal writes “it’s time for us to squarely face the degree to which all animals are driven by them.” Indeed, he maintains, emotions play an adaptive role in evolution for all species in that they induce animals to bond with and protect family units; cooperate to find food and safety; and fight predators.

One of the behaviors de Waal considers is altruism, long considered a puzzle by scientists. He avers:

“I don’t know of a single woman scientist who has got carried away by the puzzle of altruism. Women would find it hard to leave out maternal nurturance and the constant worry and attention that it entails.” 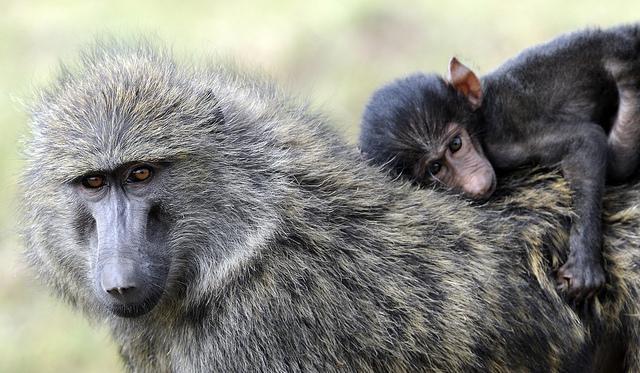 An olive baboon baby clings to its mother’s back (photo by Ray Morris).

Both scientists and philosophers are finally coming around to the conclusion that human morality is an outgrowth not of particular religious teachings, but of offspring care tendencies. These instincts are boosted by neurological and hormonal adaptations. They are so highly correlated that deficiencies in certain hormones are found in those who eschew affection and nurturing activities. In humans, when we see maternal behavior, we have no qualms in ascribing emtional engagement to both mother and child. With animals, however, we are more reluctant to do so. De Waal calls this intense aversion to antropomorphizing animals “anthropodenial,” which is not only wrong, but misleading about our place in the world, in de Waal’s view.

De Waal notes that whereas altruism seems aberrant and inexplicable to many scientists, selfishness does not, and is seen as the “default” for all species. Yet he cites evidence that selfishness does not in fact drive everything either humans or animals do. Experiments show that providing rewards for helping others actually diminishes the incentives for subjects to offer assistance. Individuals in both animal and human groups, it turns out, want to help others in distress, not only within but also across species, and don’t need or want external prodding to do it. 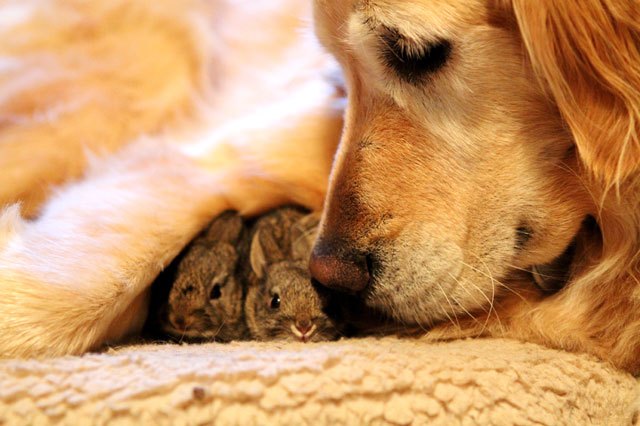 One of many photos showing animals helping other species at art-sheep.com

Besides selfishness, even more negatively-regarded behaviors are also shared among animals, such as the drive for power and dominance. Humans, however, like to style it as a sense of responsibility, or at “worst,” a desire for prestige. As de Waal points out, alluding to the innate hierarchical nature of human beings and its role as a motivating force is anathema to humans, who want to think of themselves as equitable and charitable and not so crass as to crave power and dominance.

De Waal argues, “the rejection of similarity between humans and other animals [is] a greater problem than the assumption of it.” Why do we do it? De Waal suggests it stems from “a desire to set humans apart and deny our animality.” Moreover, a deliberate separation in our minds has the self-serving function of allowing us to justify our mistreatment of animals – for example, in the ways in which we raise, transport, and slaughter them for eating.

De Waal isn’t making a case for eschewing meat. Rather, he advocates a respect for all forms of life that is more easily achieved by an awareness of the sentience of animals. He notes that scientists even used to assume human infants were sub-human organisms incapable of feeling pain. He reminds us:

“Only in the 1980s did medical procedures change, when it was revealed that babies have a full-blown pain response with grimacing and crying. Today we read about these experiments with disbelief.”

Although he doesn’t mention slavery, it is difficult not to consider the fact that whites have historically insisted to themselves as well as anyone needing convincing, that blacks were not as fully human as whites, which justified their mistreatment. Whites even went to war to defend the right to treat blacks as less than human.

So is there a line to be drawn between living beings? Or should we endeavor to accept, as de Waal advocates, that all life forms have much in common, and both their lives and ours would be immeasurably enhanced by that recognition? Whether we are considering other races or other species, it would behoove us to look for similarities as a basis for compassion and connection, rather than trying to establish our own superiority over whomever we can. 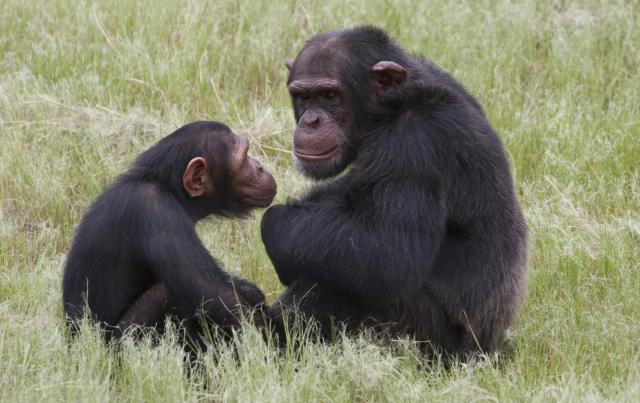 Discussion: De Waal joins a long line of scientists of animal behavior who have been trying for decades to convince people that animals are not so different from humans. They form relationships with family and friends, have loves, hates, senses of humor and senses of loss, and deserve respect from humans. Religious people point to the verse in the Bible reading “Then God said, “Let Us make man in Our image, according to Our likeness; let them have dominion over the fish of the sea, over the birds of the air, and over the cattle, over all the earth and over every creeping thing that creeps on the earth.” (Genesis 1:26, New King James Version). There is nothing in there however that says “dominion” means we cannot respect other creatures with whom we share the Earth, or even that we cannot recognize that they too have emotions.

Evaluation: This entertaining examination of animal behaviors reveals the evolutionary advantage of emotions, and the folly of not recognizing their ubiquity among other species. It is well worth reading.

We're into reading, politics, and intellectual exchanges.
View all posts by rhapsodyinbooks →
This entry was posted in Book Review. Bookmark the permalink.

4 Responses to Review of “Mama’s Last Hug: Animal Emotions and What They Tell Us About Ourselves” by Frans de Waal