No one knows quite how or why this “national day” came to be, but it seems that all sorts of foods and creations from foods have their own “holidays” now. In any event, it’s fun to celebrate something with only the slightest reason.

Rice Krispies is a breakfast cereal first sold by Kellogg’s in 1928. Rice Krispies Treats are a popular dessert made by combining Kellogg’s Rice Krispies with a combination of butter or margarine and melted marshmallows or marshmallow creme. Two of Kellogg’s employees, Malitta Jensen and Mildred Day, are credited with their invention in 1939 as a promotional vehicle for the cereal.

Students at the University of Wisconsin know how to do up a celebration right (even though they didn’t do this particular celebration on the date of the holiday). In April, 2015, they created a Rice Krispie treat that weighed in at 11,327 pounds, or seven and a half tons. Chunks were then sold on campus to raise funds for Wisconsin charities. 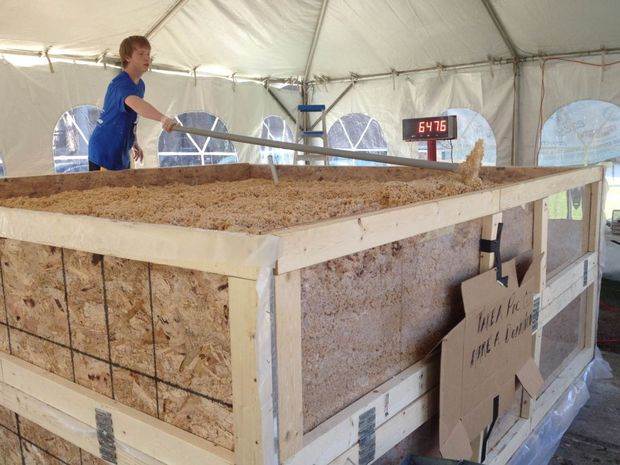 A UW student smooths out the giant Rice Krispies treat

The treat they constructed measured ten by ten by six-and-a-half feet, and took four days to make. One of their goals was to beat the world record, which was set in 2010 with a brick of Rice Krispies weighing 10,314 pounds, according to Guinness World Records.

The recipe for a Rice Krispies Treat of this size called for 5,500 pounds of cereal, 9,000 pounds of marshmallow, and 850 pounds of butter. Recipes for regular size treats are also pretty simple, if requiring less quantities of ingredients, such as this one. There are also all kinds of ways to jazz it up, adding peanut butter, chocolate, m&ms, etc. You can check them out on the Rice Krispies Treats Pinterest Page, here.

We're into reading, politics, and intellectual exchanges.
View all posts by rhapsodyinbooks →
This entry was posted in food, Holiday and tagged food, Holiday. Bookmark the permalink.