Although this author is best known as a writer of mysteries, and this book indeed features some crimes, I believe it is better characterized as literary fiction with a coming-of-age aspect to it. It is also a book deserving of the many accolades it has garnered. 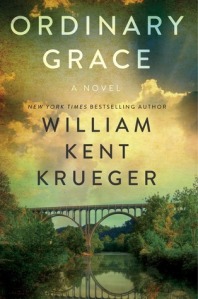 The story is narrated by Frank Drum, now 53 and looking back at the summer of 1961 when he was 13. Frank’s father is a Methodist minister, and much of the life of their family revolves around the church. Frank’s mother sings in the choir, and his older sister Ariel, talented enough to have been accepted into Julliard in the coming fall, plays the organ. Frank and his younger brother Jake are expected to attend all three of the services his father conducts on Sundays.

Ariel, who also plays piano and composes music, studies with Emil Brandt, “the best composer and pianist in Minnesota.” He was formerly engaged to Frank’s mother. Ariel is dating a younger member of the Brandt family, Karl, polite and funny and highly regarded by Frank’s family.

The family’s seemingly normal life is disrupted that summer when a number of deaths occur in the town, and Frank is tied to all of them in a way. It is unclear at first whether some or all of the deaths are related, and who might have been responsible for any or all of them. But passions run high in the town, and those who fall under suspicion have reason to fear for their lives.

Discussion: The deaths that occur drive the plot forward, and yet aren’t totally central to the book. Rather, it is the exploration of the characters of the living, and how they deal with trauma and loss, that dominate the story. The fact that all of this is filtered through the eyes and mind of a 13-year-old boy allows these impressions and insights to retain elements of a youthful perspective that would not be present with an adult narrator: the combination of naivety about the adult world with the shock of finding out some of what it’s about; the volatility of emotions; and the willingness to hold on to faith, hope and love when more cynical adults might resist such optimism. Frank is becoming aware of the complexity of human behavior, but doesn’t always understand it in the way he will later, and in the way we readers can glean from what he hears and observes.

God figures as large as any other character in this novel. What is nature of His grace? How can faith in the “ordinary” grace of God be retained when one also becomes acquainted with “the awful grace of God” – that is, the occurrence of terrible things beyond our understanding?

Evaluation: This is above all a beautiful elegy and meditation on death, faith, and the decision either to turn one’s face away from God, or accept God’s grace in all of its manifestations. There is also an examination of the range of non-faith-based responses to senseless violence, from fear to anger to the base tendency to let irrational prejudices assign blame and focus retribution. This is an extraordinary book. Highly recommended!

Note: Winner of the 2014 Edgar Award For Best Novel

5 Responses to Review of “Ordinary Grace” by William Kent Krueger