July 3, 1863 – Pickett’s Charge: The High Watermark of the Confederacy

The Battle of Gettysburg began on July 1, 1863 and was basically over by the evening of July 3. Union Major General George Gordon Meade’s Army of the Potomac was confronted by Confederate General Robert E. Lee’s Army of Northern Virginia in the small town close to the Maryland/Pennsylvania border. Fighting was intense, but on that last day, July 3, Union troops successfully repelled a massive advance on Cemetery Ridge by the Confederates which came to be known as “Pickett’s Charge.” General Longstreet argued with General Lee about the advisability of the charge, but Lee insisted. 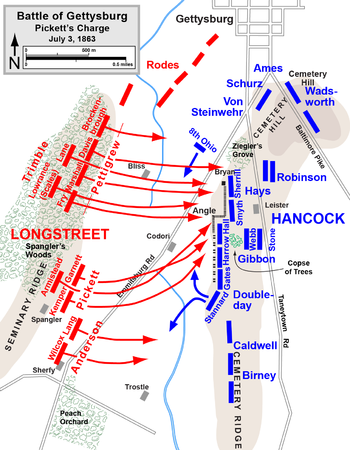 As the Library of Congress site reports:

“During the attack, only one Confederate brigade temporarily reached the top of the ridge—afterwards called the high watermark of the Confederacy—led by Brigadier General Lewis Armistead who, just before being shot, yelled, ‘Give them cold steel, boys!'”

Ironically, the Union troops that fatally wounded Armistead were under the command of his old friend, Winfield S. Hancock. Per his dying wishes, General Longstreet delivered Armistead’s Bible and other personal effects to General Hancock’s wife, Almira. It was truly a war of brother against brother.

Pickett’s Charge ultimately proved disastrous for the Confederates, with casualties approaching 60 percent. As a consequence, Confederate General Robert E. Lee was forced to retreat and ultimately abandon his attempt to reach Washington, D.C. via Pennsylvania.

On July 4, the same day that the Vicksburg garrison surrendered to Maj. Gen. Ulysses S. Grant, Lee reformed his lines into a defensive position, hoping that Meade would attack. The cautious Union commander, however, decided against the risk, a decision for which he would later be criticized. A few skirmishes accomplished nothing but adding to the casualty list. By mid-afternoon, the firing at Gettysburg had essentially stopped, and both armies began to collect their remaining wounded and bury some of the dead.

On July 5, in a driving rain, the bulk of the Army of Northern Virginia marched out of Gettysburg. The Confederates headed back to Virginia, and the invasion of the North was over.

The entire battle yielded the largest number of casualties in the Civil War: some 28,000 Confederates and 23,000 Union soldiers were killed or wounded. A National Cemetery was dedicated there in November, 1863, at which time President Lincoln paid tribute to the Union soldiers’ sacrifice in the Gettysburg Address.

We're into reading, politics, and intellectual exchanges.
View all posts by rhapsodyinbooks →
This entry was posted in History and tagged History. Bookmark the permalink.

1 Response to July 3, 1863 – Pickett’s Charge: The High Watermark of the Confederacy