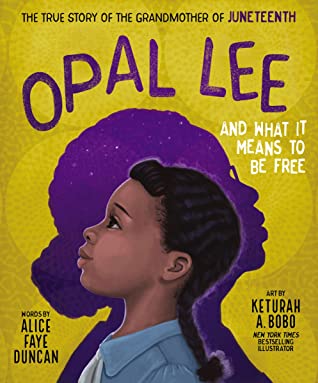 The subtitle, “The True Story of the Grandmother of Juneteenth,” refers to Opal Lee, who was born in Texas in 1926. As we learn in the back matter, her grandfather, the son of an enslaved mother, taught Opal about how Texas did not receive the news of emancipation (signed January 1, 1863) until over two years after it happened. It was June 19, 1865 when a Union general arrived in Galveston Texas and related Lincoln’s order to free the slaves. As the author explains: “This day of freedom is called Juneteenth, a word that combines June, and nineteenth.

She has good memories of Juneteenth celebrations, except for, as the author relates in her voice, the year 1939, when an angry mob burned down her family’s brand-new house. She later said, “I learned a big lesson that Juneteenth Day. Freedom is a golden coin. Struggle makes it shine.”

Illustrator Keturah A. Bobo has filled the book with uplifting images.

Back matter includes a Juneteenth timeline, Author’s Note, list of sources, and a recipe for “Juneteenth Red Punch Strawberry Lemonade,” often served at Juneteenth celebrations. (Accompanying a recipe for an alcoholic version of that drink, Edouardo Jordan explains in the “New York Times”:

“Red drinks are a staple at Juneteenth gatherings for African-Americans across the U.S. The color is a reminder of the red kola nuts and bissap (commonly known as hibiscus tea), which made their way to the Americas as part of the trans-Atlantic slave trade.”

Another New York Times article on traditional foods for Juneteeth notes, “Red foods are customary for Juneteenth, the crimson a symbol of ingenuity and resilience in bondage.”

Culinary historian and food writer Michael Twitty, in his blog Afroculinaria, proposes that red represents the fact that “enslavement narratives from Texas recall an African ancestor being lured using red flannel cloth, and many of the charms and power objects used to manipulate invisible forces required a red handkerchief.”

This article on Juneteenth Day includes a number of recipes of red foods to celebrate with, including BBQ sauce, watermelon salad, red rice, and red velvet cake.

Published by Tommy Nelson, an imprint of Thomas Nelson, 2022