Review of “Best in Snow” by David Rosenfelt

This is #24 in the Andy Carpenter crime/legal procedural series that always manages to get us laughing out loud.

As this book begins, Andy is walking his three dogs, when one of them, his golden retriever Tara, finds a body in the snow. The murder victim turns out to be the Paterson, New Jersey Mayor Alex Oliva. A young newspaper reporter, Bobby Nash, was arrested immediately. Bobby was discovered almost dead in a car crash with his body full of drugs and the car wiped clean of prints. But more importantly to the police, Oliva’s blood was found in the car, and the mayor’s wife told the police that someone named Bobby Nash had called and threatened her husband the day before. 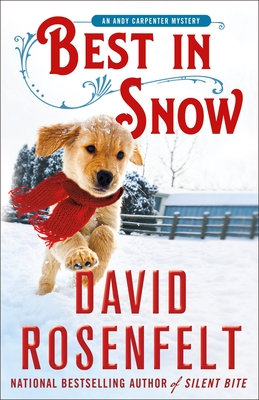 Everyone knew Bobby had a grudge against the Mayor. Bobby had authored a story accusing the mayor of bribery, but the pay-off checks shown to Bobby turned out to be elaborate fakes. Bobby’s career was ruined, and Oliva’s got a boost. Vince Sanders, editor of the local newspaper and friend of Andy’s, was Bobby’s mentor at the paper. He was convinced Bobby was not guilty of killing Oliva and begged Andy to represent him. Andy didn’t want to take the case, but Vince argued that even if Andy didn’t owe Vince anything, he could some day. . . . Besides, Vince has taken in Bobby’s puppy while Bobby is hospitalized, and Andy is always a sucker when a dog is involved.

Andy uncovers a convoluted plot of mob-related corruption and quickly becomes convinced that Bobby was framed. As he gets closer to the truth, Andy also has his life threatened. As usual, he is saved by his much braver wife Laurie and Laurie’s muscle, the always amusing, albeit taciturn Marcus. But can he save Bobby? It’s up to the jury, and the outcome is unclear until the very end.

Evaluation: My husband and I look forward to new entries in this series, which, by the way, you don’t really need to read in the order they were written. This one takes place during the Christmas season (four months long in Andy’s house, much to his chagrin), which mainly serves to allow Andy to inject many jokes about the horrors of ubiquitous Christmas music. Andy’s sarcasm and wit are unfailingly entertaining, as are his relationships with the rest of his team, which in this book also includes the “Bubeleh Team” – a group of elderly Jews who like to help hacking computer records and who bake lots of treats for Andy. (Bonus: They don’t mind working on Christmas!) For a quick, diverting read that challenges you at the same time, you can’t go wrong with David Rosenfelt’s Andy Carpenter series.

2 Responses to Review of “Best in Snow” by David Rosenfelt