Review of “Damnation Spring: A Novel” by Ash Davidson

This emotionally wrenching story is set in the late 1970s in northern California. Rich Gundersen, 53, his younger wife Colleen, 34, and one kindergarten-aged son they call Chub live in Damnation Grove, the site of ancient redwoods being harvested for lumber by Rich’s employer, Sanderson Timber Company.

The company has used herbicides for decades to keep the brush down in the land surrounding the redwoods, making it faster and cheaper to log. But mudslides over the clearcut areas are increasing in frequency and danger; the salmon are dying off in the creeks; animals are marked by deformities; and worst of all, women have been suffering a series of miscarriages and births of deformed babies. But the residents are reluctant – resistant even – to blame the herbicides, which are deemed necessary for them to make their livings.

Rich checks in regularly on Cornelius Larkin, called Lark, who was Rich’s father’s best friend. Lark had sawed the branch that clubbed Rich’s father dead after he had just turned thirty. It was, Rich said, no one’s fault but the wind’s, but still Lark carried guilt for it, and tried to be for Rich the father Rich no longer had. Lark suffers in other ways: in a logging accident that didn’t seem like such an “accident,” he had sustained breaks in his back, neck, and both hips. Lark was sure someone had severed the rope’s steel core enough to allow him to climb forty feet before it snapped. Prior to the incident he had committed the “crime” of “talking about not cutting faster than it could grow back – sustained yield before there was a name for it.” His boss Virgil Sanderson didn’t take to it kindly, calling him a communist. And then Lark’s injury happened.

Now Sanderson Timber is run by Merle Sanderson, who, like others in the area, is doing a job handed down through the generations.

Rich dreamed of the day “he’d never have to work another day for Merle Sanderson, as he had for Virgil Sanderson before him, as Rich’s father had worked for George and his granddad for Victor, all the way back for as long as men had felled redwoods.”

But he loves the redwoods, and in particular has always wanted to own some unclaimed acres of them called the 24-7 Ridge, after the redwood that dominates it. The 24-7 got its name when it was twenty-four feet, seven inches in diameter, but now it is 28-5, and three hundred seventy feet high. Rich has circled that tree every morning for the last thirty-five years, trying to figure out a way to buy that area. When the opportunity finally comes, he jumps on it, without telling Colleen; he knew she would be upset over depleting their savings and incurring more debt.

That summer in 1977, when the story begins, Rich and Colleen had barely interacted for six months. Colleen had lost another baby, miscarrying at five months. She had lost eight babies – all except for Chub, but this one made it so far along, and she was devastated. Rich was afraid of making her go through that again, so he avoided her. She blamed herself for doing something wrong that must have caused all the miscarriages.

Rich wouldn’t even talk to her about it, but her old boyfriend would. Daniel Bywater, a member of the Yurok tribe and now studying water quality, had come back to the area to test for contaminant levels. 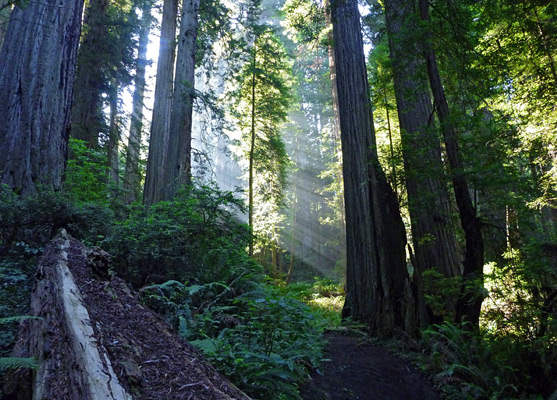 Daniel finds out that the herbicides Sanderson sprays contain the same ingredients as Agent Orange, and they’re contaminated with TCDD and Dioxin – toxic not just for plants, but for animals and people. Daniel told Colleen, “They started spraying them in the fifties, all this time they’ve been bioaccumulating.” “Building up in the fish, in the deer, you eat the deer. . . . It runs off into the water. Whatever they spray ends up right there in your coffee mug. . . . It’s nasty stuff. We’re talking birth defects, cancers.”

Loggers and their families were supposed to evince loyalty to Sanderson, and shun the hippies who came from Arcata to protest logging, as well as people like Daniel, who, as they saw it, was one of those Native Americans just trying to stir up trouble. But Colleen, hurting so much from her losses, gave Daniel information not only about her own miscarriages but about the frequent cases of abnormalities in babies born in the area over the last six years that she saw in her work as a midwife. She also, at Daniel’s request, secretly collected and labeled their water in jars and gave them to Daniel to analyze.

Rich was upset when he found out, but Colleen countered: “What if all the babies she’d lost, what if it wasn’t anything she’d done wrong?” Rich, in perhaps the most poignant passage in the book, responded: “That stuff is approved by the government. Why would they approve something if it wasn’t safe?”

Chapters narrated by Rich, Colleen, and Chub present the differing points of views and nature of the conflicts roiling the area. In this way, we also get to know the family of Colleen’s younger sister Enid, married to another logger, Eugene. Eugene is as self-serving and amoral as Merle, and his actions threaten the lives and livelihoods of everyone in the grove.

Tensions come to a head as the novel draws to a close, and readers sense tragedy is on the horizon. But the possibility for it comes from so many directions, it’s hard to predict which will be the one to break their hearts, and yours, as the story ends.

Evaluation: Davidson brings the logging industry, its workers, and idiosyncratic customs to life so thoroughly I felt as if I were watching a movie rather than reading a book. The author helps you see everything as if you were there. You also come to grasp both the appeal of a close-knit community that all works together, and the horror of it when you dare to break the rules. This is an outstanding book, but one that will gut you in the end.

3 Responses to Review of “Damnation Spring: A Novel” by Ash Davidson