Review of “Who Slays the Wicked” by C. S. Harris

Note: There are necessarily spoilers for previous books in this series.

The Sebastian St. Cyr historical crime fiction series began with the first book set in 1811, the year that George, Prince of Wales (known by the public as “Prinny”) began his nine-year tenure as Regent of the British Monarchy. (A prince regent is a prince who rules in the place of a monarch who is still the titular king but has been deemed unfit for any reason, such as age, or physical or mental incapacity. In this case, the Prince of Wales was standing in for his father George III, thought to be mad. On the death of his father in 1820, the Prince Regent became George IV.) 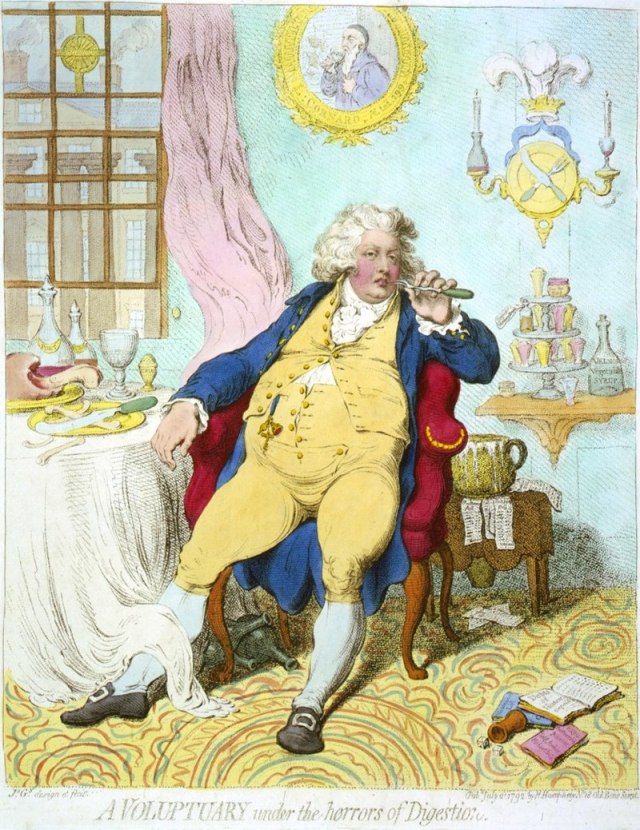 “A Voluptuary Under The Horrors of Digestion”: 1792 caricature of the Prince Regent in England by James Gillray

The Regency Era is a popular setting for fiction. For one thing, these were very interesting times historically. Most of Europe was at war, for and against Napoleon, depending on the year. America declared war on Britain in 1812, adding to the drama. Social mores were in an uproar as well: the rights of both women and slaves were being debated everywhere. And the conflict between the classes, especially in England, proved to be rich fodder for romantic plots. [You may also wish to consult my post on “An Introduction to the Regency Era.”]

In this fourteenth book in the series, Sebastian St. Cyr, Viscount Devlin, the main protagonist, is now 31. In the first book, he was suspected of a murder he did not commit, and had to become something of a Sherlock Holmes to find the real murderer to save his own skin.

In subsequent books, he was consulted on murders that involved the nobility, because he had an entrée into the upper level of society that would have been denied to the regular police. He agreed because the thought of anybody stealing away someone else’s life was an abomination to him, especially after the traumatic instances of unjust murder he witnessed in the army. He still felt guilt over these deaths, even though he could not have prevented any of them. He retained a fierce commitment to the pursuit of justice.

Devlin is aided by the counsel of his friend, the surgeon Paul Gibson, who serves as a Watson to St. Cyr’s Holmes, as well as by Sir Henry Lovejoy, now a “Bow Street Runner” (detective) who has become a friend of Devlin’s. Devlin also asks his young horse handler Tom, a former street urchin, as well as his valet, Jules Calhoun, to do reconnaissance work for him. Each has an entrée into the lower levels of society that Devlin can’t even manage in disguise. And in an increasing capacity, his wife, Hero Devlin, helps him in his investigative work.

The story begins, as usual, with the discovery of a murder victim. This time it is Anthony Marcus Ledger, Viscount Ashworth, only son and heir of the Marquis of Lindley. Ashworth is also, more importantly to Devlin, the husband of his niece, Stephanie, 19. She recently delivered twin boys and is now staying with her father-in-law at Lindley House while Ashworth’s place is being refurbished.

In spite of Devlin’s tendency to take murders personally, “as he stared down at what was left of Anthony Ledger, Sebastian felt only relief.” Ashworth was pure evil, and Devlin constantly worried about the safety of his niece. He knew that because Ashworth’s father was a wealthy, powerful nobleman, someone would have to be arrested for Ashworth’s death, whether truly guilty or not. And Devlin didn’t want Stephanie to be that someone.

[As the author points out, at that time, husband killers were dealt with more harshly than wife killers. Under common law, for a woman to kill her husband was more than simple murder. “It was also an act of treason – a rebellion against both God and King, who together had placed her husband above her as her master. As a desecration that threatened the God-ordained fabric of society, such an act was therefore seen as a threat – and punished as harshly as witchcraft.”]

Thus, Devlin needed to get to the bottom of who murdered Ashworth and why, fervently hoping it would not turn out to be Stephanie. While he did suspect her, there was much that argued for her innocence, such as the additional bodies found, all associated with Ashworth. Devlin supposed the murderer was cleaning up loose ends and eliminating anyone who might threaten exposure. Stephanie, with her two infants, didn’t seem capable of any killings besides that of her husband. But Devlin had the strong sense she was lying to him.

In the case of Ashworth, so widely reviled, there were plenty of other suspects at least. Almost everyone who knew Ashworth hated him, even shopkeepers. Ashworth was constantly ordering goods and not paying for them. As one merchant bitterly complained, “Anyone that bastard did business with, he cheated if he could. It was like a game with him – a matter of pride, a way to show that he was the one with the power, while the rest of us… the rest of us were like nothin’ to him.”

There is even a possibility of involvement at the highest levels of the government, as is usual in Harris’s books, so she can acquaint us with the convoluted political machinations of the time. In this case, 25-year-old Grand Duchess Catherine of Oldenburg, the best-loved sister of Tsar Alexander of Russia, is in London, allegedly to prepare for her brother’s impending visit. One of her ladies is Princess Ivanna Gagarin, also in her twenties, who was apparently involved somehow with Ashworth. Are the Russians responsible for all of this?

Devlin often ruminates on the nature of evil. In his experience, he has found that most murders are committed because of one of five motives: greed, whether for money or power; love, or at least sexual lust; fear; jealousy; and revenge. But, he has come to think, “there existed another breed of killer, and those were the ones Sebastian believed belonged in a category all their own: the men and women who killed for pleasure.” He thought Ashworth was in that latter group. But if so, who would slay the wicked? The answer is a surprising one.

Evaluation: I love the recurring characters in this series and their evolving interactions. In addition, one always learns a great deal of history from the stories, with a number of crimes thrown in to add tension and interest. The author does an excellent job smoothly filling in background from previous books, but I believe readers would derive more enjoyment from the books by reading the series in order.

Published by Berkley, an imprint of Penguin Random House, 2019

2 Responses to Review of “Who Slays the Wicked” by C. S. Harris