Review of “The Comforts of Home” by Susan Hill

This is the ninth in the Simon Serrailler mystery series, which consists of books focusing less on the crimes themselves and more on the lives of people who interact with Detective Chief Superintendent Serrailler, whether his family members or those he is investigating. 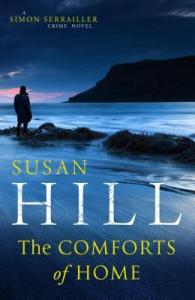 In this novel, Serrailler is recuperating from an injury incurred on the job in the previous book. He has gone to remote Taransay, an island in the Outer Hebrides of Scotland, and because he is the only available police detective around, finds himself involved in a sticky murder investigation. This helps distract him from the PTSD he incurred after his previous trauma. His time is also taken up by notes on a cold case at home involving a missing girl, a case which the Chief Constable has asked him to review during his sick leave.

Back in fictional Lafferton, a Cathedral city in the South of England, Simon’s sister Cat is dealing with a new marriage, a possible new job, and the arrival of her father, Richard, returned from France and needing a place to live. His visit, like always, causes chaos in the lives of his family. In addition, Cat’s oldest son Sam, much like the other characters, is struggling with who and what he wants to be.

In this series, because Cat is a doctor, we also hear a great deal about the medical system, and the problems of treating patients in an era of budget cuts.

While the crimes, both old and new, get solved in the end, one doesn’t read Susan Hill for the mysteries, but rather the ongoing psychological analyses she performs on her characters, and for the realistic nature of their messy lives.

Discussion: This series is not for those who want a fast-paced carnival ride with well-hidden criminals and life-threatening close calls. This book can be read as a standalone, although you will feel as if you are missing some plot threads. The author had several perfectly reasonable opportunities to fill readers in on what transpired before, such as Simon’s injury, but somewhat inexplicably forewent them.

Evaluation: This isn’t a bad series, but it is one I read mainly because I have read many of the books in it already, and so it makes for “easier” reading since I already “know” the characters and the setting.

Published in the United States by The Overlook Press, an imprint of Abrams, 2018