Review of “The Way of All Flesh” by Ambrose Parry

This historical crime novel is set in the Victorian Era, specifically in 1847 Edinburgh, Scotland. Will Raven, 19, is newly apprenticed to the eminent physician James Simpson (an actual figure from real life), who specialized in gynecology, or as it was known then, midwifery. 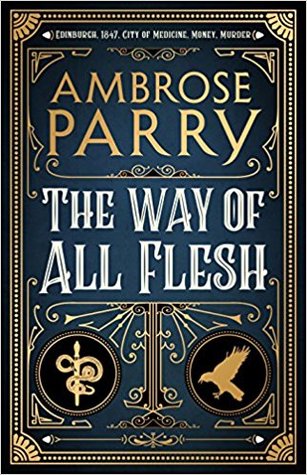 When the story begins, Will has just discovered the death of a prostitute, Evie Lawson, a woman he first encountered as her customer but then befriended. Will had come to visit her and found her corpse in a gruesome state of contortion. Will fled from the scene lest he be implicated, but became obsessed with finding out what happened to Evie. He knew the police would have no interest in investigating the fate of “just another deid hoor” as one officer dismissed the case.

Before her death, Evie had made a desperate plea to Will for money. He didn’t know what it was for, but having few resources of his own, he borrowed from a less-than-savory money lender to help her. The night before he was to begin his apprenticeship, goons working for the money lender caught up with him on the street and cut his face to show they were serious about getting repaid.

Dr. Simpson takes Will along with him on the many emergency calls he receives, and has Will administer ether to patients whose families allow it. Some don’t; there was a great deal of prejudice at the time against anesthesia, mostly from religious quarters. As Will recapitulated their objections for his friend Henry, a surgical intern:

“Pain in labour is natural, a manifestation of the life force, an ordinance from the Almighty and therefore painless childbirth is unnatural and improper. Under the influence of anaesthesia, some women have been heard to use obscene and disgusting language – words that they should never have had the opportunity to hear – which of course means that it is wrong ever to employ it.”

At any rate, ether had its dangers, and Dr. Simpson was ever on the lookout for a safer method to produce a reversible insensibility during surgery. 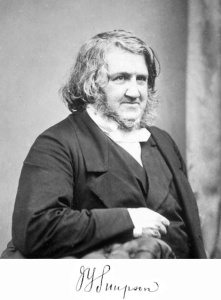 Sarah Fisher was a housemaid at the Simpson’s and also assisted with Dr. Simpson’s clinic. At first she found Will arrogant – albeit admittedly good-looking – but hoped he would eventually learn that she could be a valuable asset to him. Indeed, he does; Sarah is very bright and capable.

Nevertheless, Sarah is constantly told it is only appropriate for a man to do certain things.

“Given the same chance, she was confident she would excel over any of them, so it stung when all they saw was a housemaid.”

She thought Will, too, exhibited “the male trait of believing the world revolved around them, usually because it did.”

The women in the Simpson household have accepted the hegemony of men, telling Sarah that “a woman’s God-given role is to be a wife and mother.” Thus, Sarah noted, women were “encouraged to fuss over fripperies as they concerned themselves with how they might adorn themselves the better to please men.” At the same time, they were excoriated for employing these same fripperies to “tempt” men to engage in “sinful” behavior.

Before long, the bodies other women – mostly from the lower class, were discovered in the same contorted throes of death as Evie had suffered. Sarah and Will began to work together to solve the mystery of what was happening.

The authors conclude with a Historical Note, in which they state that many of the characters and incidents depicted are based on real events and real people, and they provide examples.

Discussion: Much of the plot turns on two medical controversies swirling at the time; as indicated above, one involved the use of anesthesia during surgery – especially during childbirth – and the other involved the supervision of women’s bodies by men. Alas, over 170 years later, in August 2019, I came across this in an article:

“Women’s bodies are one of the biggest political battlegrounds of our time. What should in many ways be personal – a woman’s body – is instead political. The assault ranges from the recent clampdown on family planning in the United States (and its global gag rule prohibiting funding for international family-planning organisations that discuss or offer abortion), to new repressive restrictions on clothing, including ‘burqa bans’, or new laws in a growing number of European countries that aim to abolish women’s ability to monetise their bodies. Everyone, it seems, has a view on what women should or shouldn’t be doing with their own bodies.”

“Still, today, almost one in two pregnancies globally are not intended, and more than 200 million women worldwide who would like to control their fertility have no access to birth-control technology. . . . In the US, the assault on family planning includes headline-grabbing changes to abortion law in certain states, renewed offensives on Planned Parenthood, an organisation that provides birth control and sexual health services for millions of the poorest women in the US . . . .”

It should be noted that Ambrose Parry is the pseudonym for the married couple Chris Brookmyre and Marisa Haetzman. Brookmyre has written over twenty novels for which he has won a number of awards, and Dr. Haetzman is a consultant anesthetist. The information provided on the authors explained that Dr. Haetzman uncovered the material for this novel while doing research for her Master’s degree in the History of Medicine. 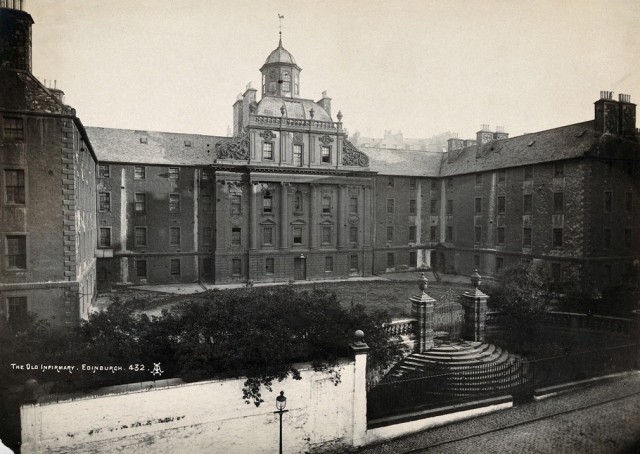 Evaluation: Although there were two authors writing this novel (see Discussion, above), the writing was seamless. The Edinburgh setting appealed to me, as well as the evolution of the main characters. There were a number of twists, and the ending caught me completely by surprise.

It turns out that this book is to be the first in a series, with Benedict Cumberbatch’s production company SunnyMarch already pre-empting the television rights. I’m delighted to hear it; I look forward to returning to these characters as well as to Victorian Edinburgh and the history of medicine.