Review of “King of Scars” by Leigh Bardugo

This is the first of a new fantasy duology taking place in the author’s “Grishaverse.” [Grisha are gifted people who can manipulate matter at its most fundamental levels. They mainly employ their extraordinary abilities to help people, but their talents can be used for ill as well as good.] I don’t think it should be read apart from the author’s previous books set in this world; there is too much unexplained backstory that would be confusing to new readers. 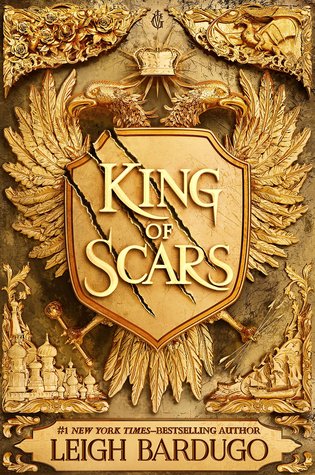 In this book, three years have passed since the end of the last story set in the Grishaverse, Ruin and Rising. The focus is now on Nikolai Lantsov, the rakish and irresistibly charming King of Ravka. During the Civil War, he was tortured by the Darkling, a powerful Grisha who used his skill for evil purposes. Nikolai was “infected” by the Darkling’s creature, a monster that has subsequently grown in strength inside Nikolai. Now, Zoya Nazyalensky, head of the Grisha army and Nikolai’s general, must lock him up every night so the creature doesn’t overtake Nikolai and drive him to go out seeking blood. Both Nikolai and Zoya are dedicated to restoring stability to the Kingdom after the devastation of war, but Nikolai’s condition imperils that goal.

Zoya is lobbying for Nikolai to take a bride, so that someone else can take over making sure that Nikolai’s beast is at bay. Nikolai is not so sure: “Zoya, I can’t very well court a bride if there’s a chance I may turn her into dinner.”

Simmering under the surface are the feelings that Nikolai and Zoya have for one another, but neither will admit to them, fearing their professional relationship would be jeopardized.

Meanwhile, a number of “miracles” have been reported throughout the Kingdom, and Nikolai and Zoya need to investigate them. Could these strange happenings, they wonder, be tied to the dark being that lives inside Nikolai? One thing is certain: the miracles are empowering the religious element in the Kingdom, and both the Apparat, or chief priest, and a man called Yuri who is heading a movement worshipping the Darkling, are gaining followers and influence because of these supernatural occurrences.

Nikolai and Zoya want to keep an eye on Yuri, so they bring him along to visit the site of the miracles. Thus the three of them enter the Fold, the dreaded area full of horrors created by the Darkling. With the Darkling dead, they assume it is now safe to enter, but other forces in the Fold overpower them. As far as the Kingdom of Ravka knows, they have disappeared.

Alternate chapters relate what is happening to Nina Zenik. Nikolai sent her, along with two other Grisha, on a secret mission to Fjerda to help endangered Grisha escape that country. The Fjerdans have been capturing Grisha and experimenting on them with Jurda parem. This drug can transform and enhance a Grisha’s power into something new and dangerous so the Grisha could be used as “weapons.” But the price for the Grisha was addiction and after a short time, death.

Nina is also trying to overcome the loss of her love Matthias, but her heart has so far refused to let him go. In addition, since her own bout with Jurda parem, she hears the whisperings of the dead, and those voices are pulling her east to the river cities. She insists her two companions go with her to Kejerut, from whence the dead are calling her. They sojourn at a nearby convent, where Nina forges a bond with Hanne, one of the novitiates with secrets of her own.

As the story builds to its dénouement, all of the main characters are confronted with life-and-death choices that will change their very natures. Moreover, the lives of many others depend on what they choose to do. These factors add monumental gravitas to the decisions they need to make

In the process of weighing their options, we learn a great deal about how and why they became who they are. Each of them has scars from pain earlier in life, and each endeavors to forget them, deny them, or hide them from view. But the memories won’t always stay buried, and the resulting vulnerability weakens them.

There is a huge build-up of tension at the end, and a number of unresolved issues that will make readers eager for the second installment.

Evaluation: Bardugo makes human passions come alive on the page. You can feel and taste the hungers of her characters, and experience the pain of loss and thrill of young love as if you were going through those emotions yourself. I also appreciate the fact that Bardugo’s characters are so idealistic and noble. We need that so much right now in the world! The dialogue is intelligent and emotionally resonant, and the political intrigue and challenges seem realistic and significant. This is an engaging book that gives you a lot to think about, as well as a lot to savor.

Published by Imprint, a part of Macmillan Children’s Publishing Group, 2019

4 Responses to Review of “King of Scars” by Leigh Bardugo