Review of “The Scent Keeper” by Erica Bauermeister 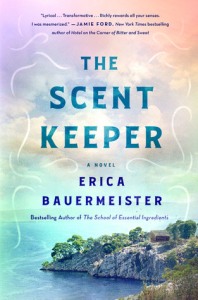 This is a coming of age story with magical realism added to the mix, perhaps a reflection of its initial similarity to Shakespeare’s “The Tempest.” It begins on an unnamed island and is narrated by Emmeline, who lives alone on the island with her father, a magician of sorts, or so she believes. Using a mysterious machine, he captures scents in glass bottles, which he stores in little drawers covering the walls of their cabin. The scents release memories as well as odors; the machine is, as later explained, analogous to a Polaroid Camera. You may not be able to visualize a day, but the scent will bring it all back to you and enable you to hold on to the moment again.

When Emmeline is twelve, her life changes, and she is forced to leave the island. Life with other people is a big adjustment for her, but eventually she adapts. Nevertheless, she remains obsessed with her father and his secrets. She finally finds out more about his invention, and how the two of them ended up on the island. But then, the story ends astoundingly abruptly.

Evaluation: Emmeline is so self-absorbed, it’s hard to like her. She is surrounded by kindness, but doesn’t seem to know how to reciprocate except to further her own interests. I didn’t like this book much at all, in spite of having loved other works by this author.

5 Responses to Review of “The Scent Keeper” by Erica Bauermeister