Review of “The Perfect Date” by Evelyn Lozada and Holly Lorincz

Co-author Evelyn Lozada is a cast member in the reality series “Basketball Wives” as well as a participant in other reality television shows. She also works as a model, marketer, and media personality. She has been listed as the lead author on other co-written books about wives and girlfriends of sports stars, similar to the theme in this story. 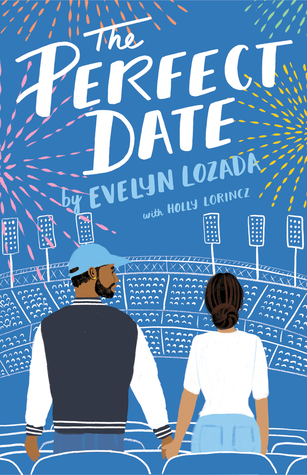 The main character in The Perfect Date is Angel Gomez, 22, a single mom who is working as a nurse during the day and as a bartender at night, all while studying for her nursing exam. Angel needs extra money to help care for her seven-year-old son Jose’s asthma condition. But her work environments are extremely stressful; in both settings she has to put up with bosses who would like more from her than her job skills.

Angel’s narration is alternated with that of Caleb “The Duke” Lewis, a pitcher for the Yankees who suffered an injury to his ankle during a shooting at a bar the year before. The Duke lost his best friend that night, and he still had nightmares about it. He has also acquired the tendency to drink too much to try to forget the incident. But the ankle is of more immediate import: if he can’t stand steadily on the mound, the Yankees will replace him, and baseball is his whole life, not to mention – his only source of income.

Thus he goes to a clinic in the middle of the Bronx instead of to the Yankee’s medical facility to get something to help the pain for his ankle; it was critical no one find out he might not be physically fit for the team. This was of course the clinic in which Angel worked for the sleazy Dr. Collins, who was willing to treat Duke for a lot of cash.

Duke was immediately attracted to Angel. He was surprised to find, later on, while drowning his sorrows in a nearby bar, that she worked there as well. Their encounter wasn’t so friendly, but when he had to go back to the clinic and the press followed him, he asked Angel to pretend to be his girlfriend. This would give him an excuse to be there other than for medical reasons. She capitulated, and later agreed to go to a fancy shindig with him as his “date.”

This party was populated mostly by ball players and their wives and girlfriends, all of whom were not only throwing around a lot of money, but acting very badly: taking drugs, having hook-ups in back rooms with people other than their partners, and being nasty to Angel, because she clearly didn’t have their “status.” But Angel and Duke got along, and she spent the night with him after the party.

Thereafter, the problems in Duke’s and Angel’s lives accelerated. Both of them faced ultimatums at their jobs, and found their moral compasses heavily challenged. As for the “fake” relationship: was it real, or were they fooling themselves? When Jose’s life is in danger, each of them has an epiphany about what is actually important.

Discussion: Character development is skimpy in this book, and the “bad guys” are total caricatures. There are a lot of other stereotypes that get too much of a workout in this story, and the writing is decidedly prosaic. But the worst part is the off-the-wall unrealistic ending. I can’t imagine it would even pass muster for a television show.

Evaluation: Don’t judge this book by the attractive cover.