Review of “The Stranger Diaries” by Elly Griffiths

Griffiths brings her skill with characters and crimes to bear in this standalone “book-within-a-book” that is not associated with any of her ongoing series. 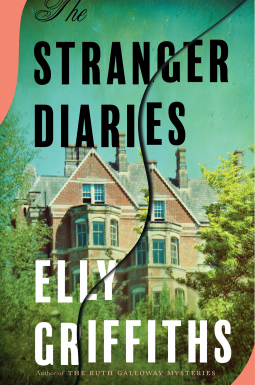 The main protagonist (although narration alters in the book) is Clare Cassidy, 45, who teaches English at Talgarth High in West Sussex, England. One of the buildings of the school is the very same Gothic mansion where, in the upstairs rooms, R. M. Holland, a (fictional) horror writer, once lived. This fact is especially meaningful to Clare because she is working on a biography of Holland.

The story about Clare and her life as she navigates the tricky shoals of being a divorced mother of a 15-year-old teen is interspersed with excerpts from Holland’s most famous work, a chilling ghost story called “The Stranger.”

As the novel opens, Clare’s close colleague has just been gruesomely murdered. Furthermore, a note left by the corpse ties the murder to Holland’s tale. This potentially could implicate Clare, the resident expert on Holland and his work. She is more worried however that she herself may be in danger, since she recently found a stranger’s writing addressed to her in one of her private diaries.

DS Harbinder Kaur, a member of the Sussez Murder Squad, is in charge of investigating the case. Harbinder still lives at home with her Punjabi parents, where she tries to maintain a balance between her mom’s worries about her daughter’s dangerous job with her own need to be out at all hours investigating. Harbinder is peppery, witty, and very clever, although she likes to hide the latter fact from others; it serves her better for them to underestimate her.

Another body soon appears, again tied to “The Stranger,” along with another ominous note. It is clear the killer knows the victims, and vice versa, and there is a great deal of panic as additional attacks occur. Harbinder in particular understands she doesn’t have much time to prevent the conclusion of Holland’s story from being reenacted in “real life” [that is, in the story about the story] and she struggles frantically to connect the dots before it is too late.

Discussion: Griffiths does an excellent job replicating a Gothic tone for the ghost story she crafts for this book. In addition, despite writing in the crime genre, Griffiths’s main protagonists always manage to come across as wryly funny and even adorable. As spooky as this story often was, I also found myself laughing out loud.

Published in the U.S. by Houghton Mifflin Harcourt, 2019

4 Responses to Review of “The Stranger Diaries” by Elly Griffiths