Review of “The Allure of Battle: A History of How Wars Have Been Won and Lost” by Cathal J. Nolan

Note: This review is by my husband Jim.

I have been an avid reader of history for many years. I estimate that I have read several hundred books that can be classified specifically as “military history.” With all due respect to John Keegan and Thucydides, Cathal J. Nolan’s The Allure of Battle may be the most perceptive and one of the best written of the bunch. 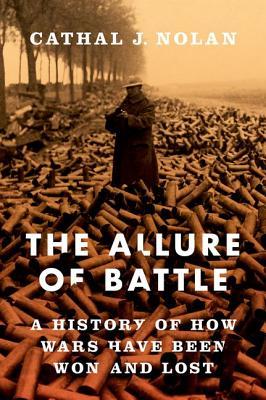 Nolan’s main thesis is that many military planners and historians have been seduced by the appeal of a big, decisive battle choreographed by a brilliant tactician (think Napoleon), as an instrument of state policy and as a tool to resolve controversies. That is, win a major battle and you can win the war. He argues that such a perception has nearly always been flawed, and has led to disastrous consequences for states basing their policies on it. Seeking a decisive battle has not only usually been the wrong strategy, but:

“. . . with few exceptions, the major power wars of the past several centuries were in the end decided by grinding exhaustion more than by the operational art of even the greatest of the modern great captains.”

Nolan bemoans the fact that time and again, military theorists as well as generals have been seduced by the “cult of battle.” To demonstrate, he delves into details of all the significant – mostly European – wars from the Thirty Years War (1618-1648) to World War II. He shows that lopsided victories in large battles seldom put national or international disputes to rest, but this fact has never led to an abandonment of the theory.

So many factors, often aleatory, figure into the final equation of victory: economic resources, food and water supplies, relative health of armies, differential access to superior weaponry, and “the powerful reality of moral and material attrition.” Moreover, military engagements often designated as “great” by historians are not necessarily the most important. For example, students of the United States Civil War focus on the battles at Antietam and Gettysburg, which stand out for the number of casualties sustained as well as their political import. But they were not decisive. Rather, the Battle of Vicksburg had much greater effect on the outcome of the war by cutting the Confederacy in two along the Mississippi River and opening the river to Northern traffic. Nuance, however, is not as compelling for either histories or propaganda campaigns as are stories of vast, bloody conflicts. Because of, or in spite of this, countries rarely seem to learn from the past. Nolan seeks to remediate that problem.

Battle of Vicksburg shown by Kurz and Allison, chromolithographers in the mid-1880s

Nolan is not so dogmatic as to assert that his thesis always applies. Importantly, he cites the example of Moltke’s success in the Austro-Prussian War (1866) as an exception. Nevertheless, he demonstrates that even such famous generals as Marlborough, Frederick II of Prussia, and Napoleon ultimately were unsuccessful in their efforts to end major disputes with climactic battles. In fact, even Moltke’s ostensible favorable outcome in the Franco-Prussian War of 1870 was quite misleading in that the French, though they were defeated in battle and their capital was occupied, continued to harass the Prussians outside Paris and eventually expelled them from France.

The archetypical example of the unsuccessful quest for a decisive battle occurred at the onset of World War I when the Germans attempted to eliminate the French army in one extended blow by executing the Schlieffen Plan before the Russians were able to mobilize. [The Schlieffen Plan was the name given to previously formulated German war plans for the invasion of France and Belgium in 1914.] The initial thrust of the German army simply expended its momentum and degenerated into the most frustrating grinding exhaustion in military history. 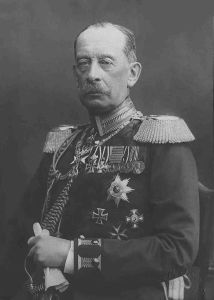 Nolan is capable not only of hard-headed analysis, but also of moving prose. He observes that the planners of war are usually older men who do not actually have to fight it. Here he describes how hatred of the war and the enemy arises in various situations, usually after the initial thrust of invasion degenerated into the slog of inglorious attrition:

“It came from fear of being shot or bayoneted at Verdun, or captured and mutilated by a Soviet partisan, or murdered by a roving SS death commando. From being 18 or 20, far from home, ashamed over crying in your slit trench every night, embarrassed by loss of bowel control. From lying under a barrage during another accursed Isonzo battle or charging a sleeping French division over the Somme with bayonet and unloaded Mauser. From seeing a buddy step on a landmine on Guadalcanal or disappear into a pink mist at El Alamein or Okinawa. Or watching a mate die from a sniper’s bullet while hung up on a the wire at Ypres or on the ash at Iwo Jima, or charging the Russian machine guns at Mukden, or sick with typhus in a prison camp, or doing forced labor down a Honshu mine. It came from hedge-fright because you thought tirailleurs or snipers were hiding behind every haystack or down the next cellar, so you tossed in a grenade as you passed by and heard a family scream. It came from scrambling with 10,000 other prisoners for ‘a bit of potato, please,’ looking up as a callous camp guard tossed scraps into a surge of starving men.”

His depiction of the condition of the Japanese garrisons on Borneo and New Guinea at the end of World War II is succinct but powerful:

“Death on land, at sea, in the air. Always death, and more death. Not glorious at all, in fact. More nihilistic: thin, fanatic, futile, fatalist.”

Evaluation: This is an excellent book that should serve as a warning to would-be conquerors and put a damper on paeans to past and future Napoleons. The hardcover book includes illustrations, maps, and extensive footnotes.

Note: Allure of Battle is the winner of the 2017 Gilder Lehrman Prize for Military History. This major book prize “recognizes the best book on military history in the English-speaking world distinguished by its scholarship, its contribution to the literature, and its appeal to both a general and an academic audience.”

2 Responses to Review of “The Allure of Battle: A History of How Wars Have Been Won and Lost” by Cathal J. Nolan