Kid Lit Review of “Pride: The Story of Harvey Milk and the Rainbow Flag” by Rob Sanders 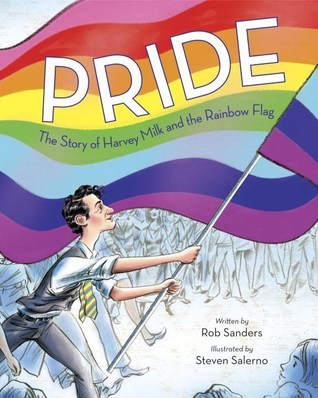 Harvey Milk was born in New York in 1930, and moved to San Francisco in 1972. When he won a seat on the San Francisco Board of Supervisors in 1977, he became one of the country’s first openly gay people elected to public office.

Harvey dreamed that one day he and his friends would be treated like everyone else, and be able to live and love as they pleased.

As the author writes:

“He discovered that the best way to change the laws was to help make laws.”

After Harvey first won public office, he had an idea:

“A symbol, he thought. We need a symbol that shows who we are and how we feel.”

He asked his friend Gilbert Baker, a designer, to help him create a symbol for the gay community, and Gilbert designed the Rainbow Flag. It was first unfurled in June, 1978.

Five months later, Harvey and the mayor of San Francisco, George Moscone, were fatally shot. According to the book:

“…Harvey and the mayor of San Francisco, George Moscone, were assassinated. Their lives were taken by a man who did not think like Harvey, or feel like him, or love like him.”

[That characterization is a bit deceptive. While the killer was a conservative and a homophobe, the motive for the killing is generally thought to be resentment at having been double-crossed in a political deal by Harvey and Moscone. Moscone was not gay. The killer, Dan White, gained renown for having been the first (possibly the last) to employ the “Twinkie defense.“ A psychiatrist testified that White had quit his job; shunned his wife; and had begun consuming junk food and sugar-laden soft drinks like Twinkies and Coca-Cola. White was convicted of voluntary manslaughter.]

But most of the story focuses on the flag and how its use spread:

Harvey’s dream
Became a flag for us all.” 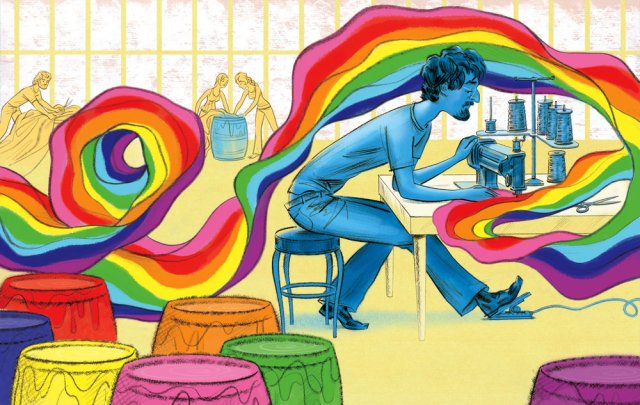 The original flag had eight stripes. Although the author mentions in the Afterword that it now has six stripes, he does not detail how or why the change came about. He also said the flag was designed by artist Gilbert Baker along with other volunteers, but this omits the role of female artist Lynn Segerblom, who created the original dyeing process for the flags. “It would be nice to get credit,” Lynn Segerblom allowed:

“’It hurts,’” said Segerblom, 62, of Torrance, who co-chaired the 1978 Gay Freedom Day decorations committee that year with Baker and remembers the conceptualizing and creation of the rainbow flag as a joyous collaboration with friends.” 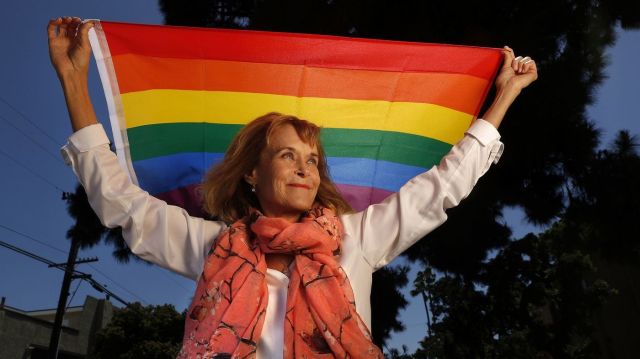 Lynn Segerblom, one of the women behind the creation of the first rainbow flags for the 1978 Gay Freedom Day Parade in San Francisco, is photographed with a rainbow flag near her home in Torrance. (Mel Melcon / Los Angeles Times)

He also does not provide the specific meaning originally assigned to each of the colors, although this information is perhaps not age-appropriate, since the hot pink stood for sex. The hot pink was quickly dropped, in any event, because it turned out the dye was difficult to get in quantities. In 1979 the flag was modified again because when hung vertically from the lamp posts of San Francisco’s Market Street, the center stripe was obscured by the post itself. The designers found that changing the flag to have even number of stripes rectified the situation. So the turquoise stripe (standing for magic/art) was dropped, and indigo (serenity) and turquoise were combined in a change to royal blue.

The author tells us that in 1994, a new rainbow flag was designed that was a mile long, but doesn’t say why. This was in fact a memorial for the 25th anniversary of the Stonewall Riots. The riots were a series of demonstrations by members of the LGBT community against a police raid that took place in the early morning hours of June 28, 1969, at the Stonewall Inn – a gay bar – in the Greenwich Village neighborhood of Manhattan, New York City. The Stonewall Riots are widely considered to constitute the most important event leading to the gay liberation movement and the modern fight for LGBT rights in the United States.

At the end of the book there is a time line for both Harvey Milk and for the Rainbow Flag. A short list is also provided for further reading, as well as a page of photographs (albeit uncaptioned).

Evaluation: Although this book is for very young children (ages 4-9), it assumes a lot of knowledge readers may not have, such as what does it mean to be “gay” and why and in what ways gays were not (and still are not) treated like everyone else. Major events in the gay rights fight are also sanitized. Nevertheless, it is important that children understand this area of the civil rights struggle as well as that of race. As the author said in an interview:

“The real inspiration came on the night of the SCOTUS decision for marriage equality. I watched the news coverage that afternoon, and by the evening it seemed like the whole country, including the White House, was awash in the colors of the rainbow flag. I thought, This is something I don’t think kids know about — the importance of this symbol. I wanted to celebrate what was going on in our world by sharing that information with kids in a picture book.”

And that is an admirable goal, indeed. 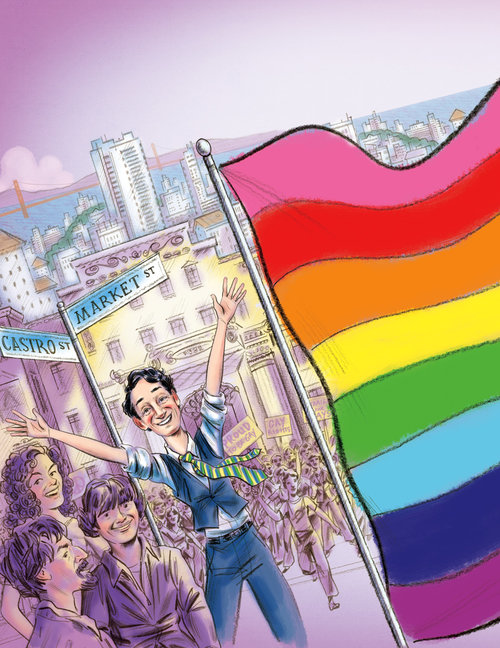 5 Responses to Kid Lit Review of “Pride: The Story of Harvey Milk and the Rainbow Flag” by Rob Sanders