Review of “The Best Kind of People” by Zoe Whittall 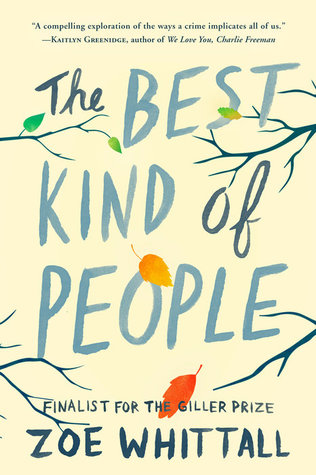 George Woodbury is a prep school science teacher in the affluent town of Avalon Hills and a hero in the town for having stopping a school shooting almost ten years earlier. But on the day of his daughter Sadie’s 17th birthday, the police come to arrest him for accusations of sexual misconduct with female students during a weekend field trip he was supervising. He is held in jail without bail until his trial date, which would not be for another eight months.

George insists he was being set up, but there were four different girls making the accusations.

The community’s judgment is immediate, as is, surprisingly, the family’s. The story takes us through the period leading up to the trial, as well as its aftermath. There are any number of tragic repercussions, as well as some unexpected twists.

As the author writes about Avalon Hills, this was a community that “seemed ripe for parody, with its perfect greenery, cafes boasting fair-trade coffee and chocolate, a yoga studio on every block, and its low high school dropout rate.”

Sadie was a reflection of the seemingly perfect families in Avalon Hills:

“Sadie was in the accelerated academic program, a group of well-regarded students who, barring a stint in the eating disorder wing or a trip to rehab for Adderall addiction, were all heading to prestigious universities. . . . They ate lunch in the student government lounge, because naturally they were the student government.”

After her dad is arrested, Sadie is worried about all kinds of things: how do you know if a person is really good or bad? What makes someone do something bad? What if criminal behavior is hereditary? Sadie was also plagued by not believing her own father. It was not that he ever gave any indication of the behavior he was accused of, but she was socialized – by her father himself! – to give victims the benefit of the doubt.

Sadie said to her brother Andrew: “Dad is fucked. We’re fucked. Hasn’t it totally shattered your image of him?”

George’s wife Joan, a nurse, looks for a medical explanation, wondering, what if George has a tumor that made him do it? What if he’s physically sick?

Both Sadie and Joan discovered that “. . . if someone puts the possibility of something terrible in your head – and people around you believe it – you can’t go back to thinking its completely inconceivable.” Because at some level, the very fact of the accusations had a persuasive effect.

Joan felt like “[s]omeone had taken Joan’s only confidant, the one person who actually knew her completely, and her best friend, and replaced him with a monster. The person she knew and trusted was gone.”

Only Andrew, who is gay, has some doubts, because he knows how malicious high school girls can be from his own experiences: He tells his mom:

“Some of those girls accusing Dad, they look just like the girls who spit in my face, who had their boyfriends kick out my car headlights and kick me into a corner and then piss on me as I huddled there. That’s all I can see, when I see those girls – the evil suburban menace, you know?”

Meanwhile, not only George, but the rest of the family is now subject to the judgment and shunning of their community. How could the wife have been oblivious? She must be guilty of knowing or at least suspecting and not reporting it. And as for Sadie and Andrew, they are tainted by association: Sadie finds obscene graffiti on her things – “whore” and “Sadie Woodbury sucks big dicks!” And Andrew is pilloried by the local press for being gay, the implication being that the whole family is “perverted” in some way.

Sadie goes to stay at her boyfriend Jimmy’s house to get away from the harassment. Along with Jimmy’s mom Elaine, also living in the house is Elaine’s boyfriend and frustrated author Kevin. Kevin keeps stashes of pornography and pot in the house, and Sadie starts stealing his pot, as well as accepting Kevin’s offers to join him in smoking when he is around. Pretty soon she is turned off by Jimmy and fantasizing about Kevin. Kevin is paying a lot of attention to her and she misinterprets it.

Sadie gets more into drugs and drinking, and even gets a “dealer.” She blames her father. “Fuck my dad. Fuck him.”

But then there is an unforeseen development at the trial, and the family’s life is turned upside down once again.

Discussion: At the end of the book, a number of questions were left unanswered. But maybe the process was the point – i.e., what happened to everyone involved regardless of what the truth of the matter was.

It struck me as odd however, that not only does almost everyone almost immediately assume George’s guilt, but no one appears to be much interested in finding out the facts. There is a lot of discussion about rape and victimhood, and “he said” versus “she said” situations, but as for what specifically happened on the field trip, it seems not even George’s family is interested in the details.

I felt the author was making a point about the way this community turned on the family and tormented them, but there was also no “meta level” discussion about why they would do that. Wouldn’t a number of them feel sympathy toward the family or at least the kids? And if not, why not?

Finally, there aren’t really many likable characters in this book, with the exception of Sadie’s boyfriend Jimmy, who is, however, so clueless and feckless there is a limit to how much a reader can identify with him.

Evaluation: This would be an excellent book for book clubs. There are so many topics to discuss, from the specifics of the reaction of this family and community to the accusations, to the whole question of sexual misconduct accusations generally. One could also have a lively discussion about what different readers thought happened at the end; I would love to be in on that one!