According to The Popcorn Board (an organization funded by U.S. popcorn processors to raise awareness of popcorn), the actual date of National Popcorn Day is a matter of debate. Some sources report it as January 19; others claim it takes place on whatever day the Super Bowl falls on. It doesn’t matter to me; today seems like as good a day as any to talk about popcorn.

The Spanish exploration of the New World is notable (inter alia) for introducing Europeans to popcorn. When Columbus first encountered the Arawak tribe, he was given a popcorn corsage. (And then he and his men killed them all, but not because of the popcorn.)

… and then we can start raping and killing….

Popcorn also played a large role in Aztec culture. It was often made into necklaces or headdresses, and it was commonly used to decorate religious statues. Aztec girls danced in popcorn garlands (and not much else). One Aztec ritual involved throwing a whole ear of un-popped popcorn into a fire as a sacrifice to the gods. They referred to the kernels which came out as “hailstones.”

Popcorn, is of course, a type of corn (or maize). Of the six types of corn/maize – pod, sweet, flour, dent, flint, and popcorn — only popcorn pops. (Rather clever that popcorn is named popcorn….)

A number of states currently vie for the record for making the World’s Largest Popcorn Ball. In 2013, the honors went to The Indiana State Fair with a 6,510-pound popcorn ball (topping the old record by 1,450 pounds). The popcorn ball took 75 people 329 hours to build and used 977 pounds of popped popcorn; 1,113 pounds of mushroom-shaped popcorn kernels; and 5,534 pounds of caramel-like syrup to hold the popcorn ball together.

There are probably as many recipes for popcorn balls on the web as there are popcorn kernels in the world, but I like this one for fancy popcorn balls from Orville Redenbacher:

You can also take advantage of the chocolate-caramel-salt craze with popcorn, as with this easy recipe for Twix Caramel Popcorn. 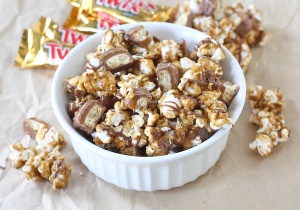 We're into reading, politics, and intellectual exchanges.
View all posts by rhapsodyinbooks →
This entry was posted in food, Holiday and tagged food, Holiday. Bookmark the permalink.