Review of “The Secret Language of Stones” by M.J. Rose

It is 1918, and Opaline Duplessi has been working in Paris for three years in the jewelry shop of her Russian friends Pavel and Anna Orloff. Opaline specializes in making talismans for mothers whose sons died in the war. The descendant of a witch, Opaline practices “a combination of psychometry and lithomancy.. . ” This means that when she combines personal items, such as locks of hair, with gemstones, she can receive messages from beyond the grave, and pass them on to grieving loved ones. 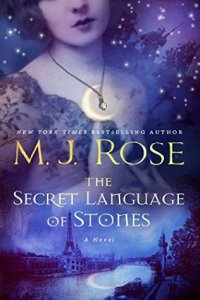 Everything changes when Opaline receives a visit from the mother of Jean Luc Forêt, lost on the front. Jean Luc was a journalist and author of the “Ma Cher” columns in the paper – weekly columns to a fictional, unnamed fiancée. As Jean Luc’s mother explains, every woman imagined that she was “Ma Cher.”

To Opaline’s shock, Jean Luc begins to speak directly to her through the talisman. Thus Opaline can’t resist keeping the actual talisman of Jean Luc, substituting a replica for his mother. She then begins to have a relationship with a ghost. And this is no tepid relationship either.

Moreover, there is some background intrigue regarding the changing government in Russia, and several of the characters are put in grave danger.

Discussion: I found this book to be very reminiscent of Susanna Kearsley’s book The Firebird, with its mix of the paranormal skill of psychometry, emphasis on arts and artifacts, and Russian history (albeit set some 150 years later). But this book has an emphasis on “paranormal sex,” which to me seemed more than a bit over the top. In addition, I didn’t find either the twist or the ending unexpected at all.

Evaluation: This was a fairly enjoyable read, at least for the parts about the history of WWI Paris and the information about gemstones. I suspect many women will appreciate the erotica, but for me, it was a turn-off, so to speak. Other reviewers enjoyed it more.

3 Responses to Review of “The Secret Language of Stones” by M.J. Rose