Fahrenheit 451, written by Ray Bradbury in 1953 during the height of the Cold War, cannot be fully understood outside of its historical context. America was clouded by an atmosphere of paranoia, suspicion, and the fearful sense of a world rushing toward a nuclear holocaust. It was the heyday of “McCarthyism,” named after Senator Joe McCarthy, who went on a crusade to root out alleged Communists and homosexuals both inside and outside government. His witch-hunts destroyed a great many careers, and even resulted in suicides by some of his victims. As PBS reports:

“… the paranoid hunt for infiltrators was notoriously difficult on writers and entertainers, many of whom were labeled communist sympathizers and were unable to continue working. Some had their passports taken away, while others were jailed for refusing to give the names of other communists. The trials, which were well publicized, could often destroy a career with a single unsubstantiated accusation. Among those well-known artists accused of communist sympathies or called before the committee were Dashiell Hammett, Waldo Salt, Lillian Hellman, Lena Horne, Paul Robeson, Elia Kazan, Arthur Miller, Aaron Copland, Leonard Bernstein, Charlie Chaplin and Group Theatre members Clifford Odets, Elia Kazan, and Stella Adler. In all, three hundred and twenty artists were blacklisted, and for many of them this meant the end of exceptional and promising careers.”

“Fahrenheit 451,” Bradbury tells us at the start of his original novel, is the temperature at which book paper catches fire and burns. In his imagined future dystopia, Guy Montag is a “fireman” who starts fires rather than stopping them. The firemen respond to calls of those who accuse someone of harboring books: they burn the books along with the house, and the owners are arrested (unless they choose to commit suicide). Books are forbidden because they can allow people to think, to be unhappy, to question the government, and to question war.

Montag, married to a drugged-up, tuned-out wife he can’t even remember how he met, believes he is happy, until he encounters his new neighbor Clarisse. A seventeen-year-old girl, she has been identified as “crazy” and “dangerous” because she is not enslaved to the media and its hypnotic messages; she takes walks, examines her surroundings and the people in it, talks with her family and others about matters of substance, and most importantly, is not afraid to ask questions.

This graphic retelling, approved by Bradbury, is a shorter version of the original, and in a way, does a lot of the “thinking” for you, since it provides visual images to replace ideas, and dialogue to sit in for narration. The truncated speeches by characters fit with the format as well as the (sometimes, at least) shorter attention span of readers. 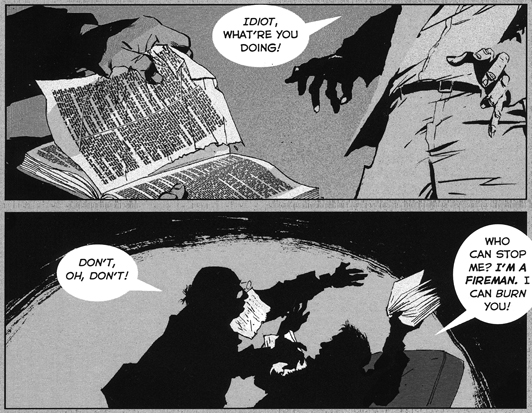 Tim Hamilton does a good job with the illustrations, using a muted color palette to provide a bleak dystopian feel, with periodic leaps to the bright yellow, red, and orange of the fire scenes. Thankfully, the people he draws are not as unattractive as are so many graphic novel protagonists (for reasons unknown to me).

Discussion: Many classics are now being issued as graphic novels. I tend to have an “old-fashioned” outlook, preferring books. But I know that all the young people in my family, at least, tend to reject anything that doesn’t have a lot of visual content and a video-game type appeal. So a graphic version is therefore, to my mind, preferable to no version at all. Furthermore, in this case I am entertained by the fact that a graphic novel version of Fahrenheit 451 is in the postmodern sense a meta-commentary on the fate of books, taking the plot of the original one step further.

Evaluation: Tim Hamilton does an excellent job on this graphic version of the book, if you prefer this particular format.

Published by Hill and Wang, a division of Farrar, Straus and Giroux, 2009

Note: There is an amazingly excellent teaching guide here. In addition, John Green, in his always-entertaining teaching videos, analyzes the original book in two parts, the first of which is shown below.

4 Responses to Review of “Ray Bradbury’s Fahrenheit 451: The Authorized Adaptation” by Tim Hamilton