National Poetry Month Kid Lit Review of “Rutherford B. Who Was He? Poems About Our Presidents” by Marilyn Singer

These poems are immensely clever. In just a few rhyming and often very funny lines the author manages to convey the essence of each president’s time in office. 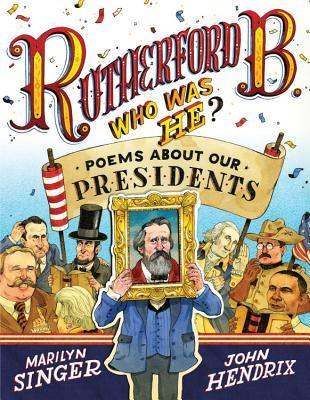 For example, this is the poem from whence the title comes:

“Rutherford B., who was he?
Honest and upstanding, or His Fraudulency?
He won a harsh election with disputes and appeals,
(and also quite possibly backroom deals).
He believed in suffrage, thought the South would comply,
that all would get to vote (which proved to be a lie).
He had faith in education and desire for reform,
but he chose to steer a middle path
and not stir up a storm.
He had radical thoughts and conservative ways.
He said so himself, did President Hayes.”

The poem about Theodore Roosevelt is succinctly informative, with the accompanying picture giving a perfect representation of his personality.

How compactly the author tells what happened to James A. Garfield:

“He won a close election, was eager to begin.
Got shot by a crazed office seeker.
Doctors likely did him in.”

The poem about Abraham Lincoln is serious, and is paired with one about Andrew Johnson that is very funny. 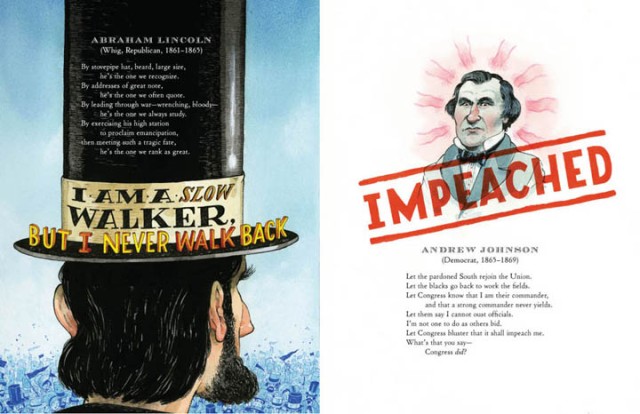 As with many of the poems, the artwork accompanying the verse about Grant adds much to the composite portrait crafted by the combination of author and illustrator. 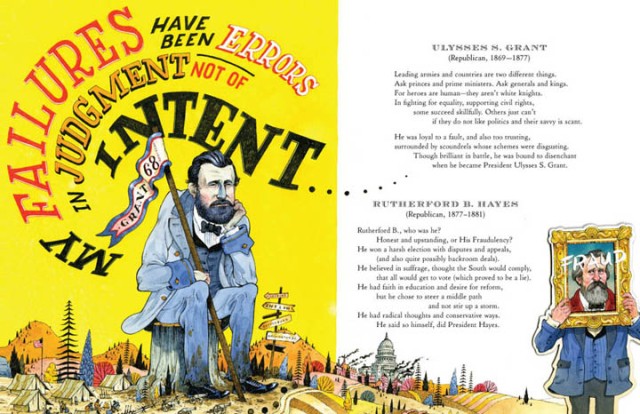 “No one was brasher
than that former haberdasher,
more prone to fury
than that man from Missouri….”

The poems begin with George Washington and continue through and including the administration of Barak Obama. 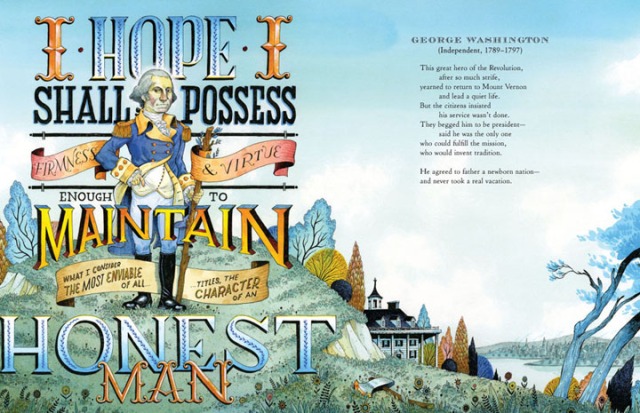 The ingenious mixed media illustrations by John Hendrix add wonderful details to the history of each president’s administration. His pictures are totally unpredictable and his inspired visual interpretations will have you shaking your head in appreciation.

The back matter includes short biographies of each president including a significant quote by each of them.

Evaluation: This is a fantastic way for kids to learn about the U.S. Presidents. Highly recommended!

Published by Disney/Hyperion Books, an imprint of Disney Book Group, 2013

5 Responses to National Poetry Month Kid Lit Review of “Rutherford B. Who Was He? Poems About Our Presidents” by Marilyn Singer