Reminder: This list refers to books I read in 2014, not necessarily books that were published only in 2014.

This year many of my favorite books were not what I would necessarily call “best” books but they were books I thought were fun to read. They are perhaps not for everyone. Therefore I divide them by genre.

All The Light We Cannot See by Anthony Doerr

This powerful, emotionally affecting and unforgettable story takes place in the Nazi period, but the focus is more on the impact of Nazism on non-Jews, and in particular, on the German children it was supposed to benefit. The author enables us to imagine vividly what it was like to be alive at that time, subject to the same piercing fears and privations, facing the same obstacles and moral dilemmas, and confronted with both the depths of depravity and the heights of heroism. While the subject matter is dark, the story is told with poetic eloquence and poignant compassion.

The Remedy for Love by Bill Roorbach

This is a deeply moving, powerful story about two people thrown together during a huge blizzard in Maine, that explores love and intimacy in the face of loneliness, fear and loss.

The Colour of Milk by Nell Leyshon

There are plenty of reasons to suspect, right from the beginning, that something bad is going to happen to the 15-year-old narrator, but there are at least three potential sources for danger to her, and we don’t really know from whence it will come. This is excellent literature, and the story will haunt you. Like Emma Donoghue’s Room, you want to cover your eyes as the truth unfolds, yet you can’t look away.

One Plus One by Jojo Moyes

Jojo Moyes hardly ever disappoints. Here she tells the story of a blended group of people – two adults and two kids with different parents – who come together and become something more; they become a family.

The Ship of Brides by Jojo Moyes

This is from Jojo Moyes’ backlist, and is a fascinating glimpse into a part of history of which many people are unaware. In July 1946, the British aircraft carrier HMS Victorious traveled from Sydney to take 655 Australian war brides of British servicemen to Britain where their husbands awaited them. More than 1100 men also were on board. This book tells the stories of some of those onboard.

We Are All Completely Beside Ourselves by Karen Joy Fowler 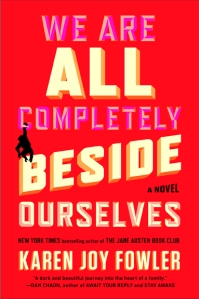 At the very beginning of this book, you learn that two of narrator’s siblings have left home. As the plot unfolds, you find out why they did so. This book won the 2014 PEN/Faulkner Award, made the short list for the 2014 Man Booker Prize, and was named a Best of 2013 pick by a number of periodicals.

The Pearl That Broke Its Shell by Nadia Hashimi

In The Pearl That Broke Its Shell, we get to know a (fictional) victim of domestic abuse in Afghanistan, a young girl named Rahima, who is married off at age 13 to Abdul Khaliq, a fierce local warlord in his late forties. Rahima’s story alternates with that of her great-great-great grandmother Shekiba, as gradually told to Rahima by her aunt. As Rahima’s situation gets worse, she thinks more and more about Shekiba’s story, and the steps Shekiba took to change her naseeb or destiny.

There are no magical dei ex machina for women in Afghanistan, but the two brave and determined women who are the protagonists of this book do what they can to save themselves, and it will make your heart soar.

The Rosie Project by Graeme Simsion

The story is narrated by 39-year-old Don Tillman, a genetics professor in Melbourne, Australia who has Asperger’s syndrome. It is a heart-warming love story, and a movie is in the works.

Two more are worth mentioning that I really liked but which are quite quirky, and may not appeal to all readers. Both are very lyrical, and even somewhat fantastical:

The Lighthouse by Paulette Jiles

How To Tell Toledo From the Night Sky by Lydia Netzer

The Secret Place by Tana French

Slaughter once again returns to Atlanta in the 1970s to show what it was like for female cops. Her writing is excellent, as always.

The Marco Effect by Jussi Adler-Olsen

Adler-Olsen continues his likable series about the Department Q detectives. This one had us on the edge of our seats.

The Cuckoo’s Calling by Robert Galbraith

The Silkworm by Robert Galbraith

Rowling/Galbraith has a proven knack for writing. I can’t wait for more in this series about detective Cormoran Strike and his female sidekick Robin.

The Martian by Andy Weir

This is a tension-filled, exciting story about astronaut Mark Watney, presumed dead and stranded on Mars after a vicious sandstorm forces the rest of the crew to abandon the mission and take off for Earth. Watney is only wounded, however, and manages to make his way back to temporary safety in “the Hab” or habitat constructed by the astronauts for long-term survival. Mark knows that another mission is due back to Mars in four years, but there is not enough food to last that long, and the ability to communicate by radio was lost in the storm. A movie is in the works.

Hugh Howey gets his own category; he’s sui generis and that good:

These books describe life in a post-apocalyptic society. They are uniquely creative, full of exciting twists, and don’t bog you down with world-building.

This is another scifi/post-apocalyptic series that is completely different than the Silo Series, and just as fascinating.

Fantasies are definitely not for everyone. They tend to be epic both in terms of content and length, and often include a lot of violence. But you can get very absorbed in the worlds these authors create, and very invested in the characters.

The Name of the Wind

The third book of this series is not yet out, but should be coming soon. The books tell the story of Kvote, “The King Killer” and it has layers upon layers, as well as legions of rabid fans.

The First Law: Books One, Two, and Three

This is the most violent series I read, and while I generally tend to eschew (and abhor) violence, I fell in love with the very unique characters in this series, especially the main protagonist, Logen Ninefingers.

This was the first book I read by Abercrombie, and I liked it so much I then read his First Law series. Half A King is the first of a new series, and it is classified as Young Adult.

In my experience, fantasy books by women spend much more time on love and family, even though they also feature the usual epic tropes, including violence. But this series of six (they are divided into two trilogies but really are a part of one series of six) will grab your heart. I cried through most of at least two of the books!

I raced through the entire Outlander series this year, so I could be up-to-speed by the time the series debuted on the Starz network. This saga is historical fiction that involves time travel and lots of romance – okay, sex. And oh, the television series. If you don’t get Starz, try to watch for the DVD. The guy who plays Jamie gives new meaning to the phrase “attractive male lead.”

Maggie Stiefvater is one of my favorite authors of any genre. I am not including her Raven Cycle series in this category, because it is not yet complete. But I loved her book Sinner, which is associated with the Shiver Series, but is a standalone focused on the characters of Isabel and Cole. 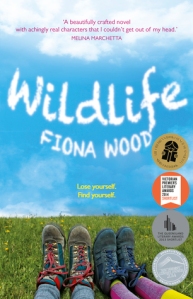 Fiona Wood is yet another outstanding Australian author who provides one of the best explorations of YA sex I have read. Get this one for your teenaged daughters.

Although some might place this in the crime category, it is also a lovely meditation on faith, family, and coming of age.

Not as many of the books I read this year overawed me as in previous years. I’m hoping for a better reading year in 2015!

We're into reading, politics, and intellectual exchanges.
View all posts by rhapsodyinbooks →
This entry was posted in books and tagged books. Bookmark the permalink.