Isaac Asimov, born on this day in 1920, was an American scientist and author, perhaps now best known for his science fiction. He was one of the most prolific writers of all time, having written or edited more than 500 books and an estimated 90,000 letters and postcards. Excitingly for librarians and fans of the cult movie “Party Girl”, his books were published in nine out of ten major categories of the Dewey Decimal Classification. He received a gazillion awards in his lifetime, along with 14 honorary doctorate degrees from universities.

Parker Posey struggles with her library job in Party Girl

Tragically, he died from AIDS contracted from a blood transfusion received during a heart bypass operation in December 1983. 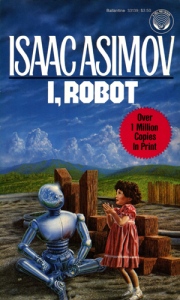 Asimov is one of my favorite authors. I love the Foundation series, the Robot series, and the great short story “Nightfall” (voted in 1964 by the Science Fiction Writers of America to be the best short science fiction story of all time). My favorite standalone book by him is probably The Gods Themselves. (See my review, here.) 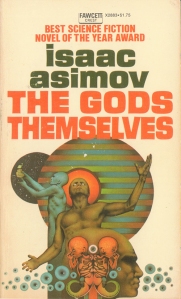 As I said in my review, much of the plot can be summarized by the lyrics of “Modern English” in “I Melt With You”:

Not surprisingly, this is also one of my favorite songs! Here is the video of Modern English playing “I’ll Melt With You”:

Happy Birthday Isaac Asimov and thank you for your many gifts to the world!!

We're into reading, politics, and intellectual exchanges.
View all posts by rhapsodyinbooks →
This entry was posted in books and tagged books. Bookmark the permalink.