Review of “Sea of Tranquility” by Katja Millay

This book knocked me out. The author reminds me of Melina Marchetta in the way she manages to make the characters so real and so affecting.  The characterization and dialogue are excellent, and I was extremely moved while reading it. 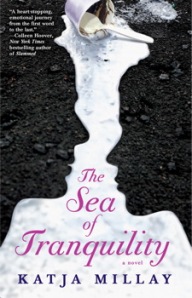 The story is narrated by two 17-year-olds, Nastya and Josh, who meet when Nastya transfers to Josh’s school for her senior year.  We quickly learn the ways in which Josh has been damaged in his life, but we don’t know so much about Nastya; only that she has been so traumatized that, as the book begins, she hasn’t spoken in 452 days. We also find out that she used to be a pianist of some talent, but part of the traumatic event involved the destruction of one of her hands, and she no longer can play.

Nastya may not speak, but she “thinks” her narration, letting us know she is bitter, cynical, and angry, and determined not to like anyone or let them like her. Josh is quiet too (although not, of course, as quiet as Nastya) and also just wants to be left alone. The other kids pretty much leave him be, with the exception of his best friend Drew, who is so unremittingly outrageous in his blatant attempts to charm that even Nastya can’t resist finding him endearing. Eventually, we come to feel the same way.

Nastya goes running every night, for as long and as hard as she can; she wants “to suck every ounce of energy out of myself so that there was nothing left to use for regret or fear or remembering.” She also keeps a picture of the moon on her bedroom ceiling; she wants the reminder that the so-called Sea of Tranquility in the moon is also not what it appears to be:

“I thought it sounded like this beautiful, peaceful place… A place that would swallow you up and accept you no matter what. But it’s not. It’s not a sea at all. It’s just a big, dark shadow on the moon. The whole name is a lie.”

Nastya feels everything about who she is now is a lie as well. But in fact, she no longer knows who she is or what her role can be in the world. As far as she is concerned, she “died” on that day two years before when the terrible thing happened to her and destroyed her life. She wonders, she says, if she will ever know the “truth” of herself now. Josh, too, is for the most part defined by the tragedies in his life. While they each inhabit their sorrow differently, both are basically good kids who have been caught up in a maelstrom of loss, and who desperately seek self-possession and peace of mind.

Nastya strikes up a relationship with Josh, seemingly because he is quiet and doesn’t expect anything of her, and because it apparently is okay if she says nothing at all. When, shortly thereafter, Josh’s grandpa passes away, Josh confesses to Nastya that before he died, his grandpa told Josh something extraordinary. This revelation turns out to be key for both Nastya and Josh, and is part of what made this book so transcendent for me.

Meanwhile, as the story develops we get invested also in the remarkable group of teens that forms relationships with and around Nastya and Josh. And we wonder if the two main protagonists can somehow manage to save themselves, and if by so doing, they can save each other.

Discussion: On several levels, this book is about life after death. The plot elements sing both a requiem and a hymn for resurrection, and form a tribute to love, hope, family, and faith. One of the themes in the background, the poem “Renascence” by Edna St. Vincent Millay, serves as an apt recapitulation of the story.

The ending just drained me; not in a bad way, but in a very powerful, intense way.  I felt like I needed the kind of hug that Josh seemed expert at delivering, one that wraps all around you, and won’t let go until you are ready to be let go.

Evaluation: This is not an easy book emotionally, but it’s an amazing and unforgettable book, and should not be missed. I haven’t revealed too much, because so much of the appeal is in the finding out as it unfolds, but I can’t really think of anything about this book that isn’t perfect.

Published by Atria Books, an imprint of Simon & Schuster, Inc., 2012

9 Responses to Review of “Sea of Tranquility” by Katja Millay