In Tucson, Jim and I saw Matt Tavares at a workshop for illustrators of children’s baseball books, and we have never seen a more enthusiastic, joyful fan of baseball ever! This delight for, and exhilaration over the sport comes through in all of his books. Ted Williams is a perfect subject for Tavares since Williams also had so much enthusiasm for the game.

Tavares tells what a hero Williams was, in spite of his reputation for being a jerk by throwing tantrums, cursing, dissing the fans, and so on. But most baseball fans have excused him, because he was just too good not to appreciate. He was Tavares’ father’s childhood idol, and one of my husband Jim’s as well. 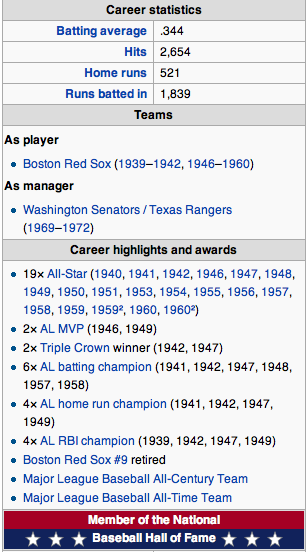 The book explains just how and why Williams was so amazing – both on and off the baseball field. For example, Williams was a figher-pilot Marine hero both in World War II and Korea. His military service took almost five full years out of his career, nearly all when he was “in his prime,” yet he still managed to amass amazing batting numbers. Most modern statistical analyses place Williams, along with Babe Ruth and Barry Bonds, among the three best hitters to have played the game. And his service garnered him accolades as well, including a Presidential Medal of Freedom.

The illustrations (watercolor, gouache, and pencil), also by Tavares, are up to the author/illustrator’s usual high standards in terms of historical authenticity and the ability to capture action and convey emotions. When Jim looked at the pictures he exclaimed, “Yeah! That’s Williams exactly!”

At the back of the book there are background notes and a page of statistics (which to my disgust and amazement, Jim could cite without looking).

Evaluation: I don’t like watching baseball, but I sure love reading about the heroes who have participated in the game. This is a great book, and not just for baseball fans!

Note: This is an author you should get to know. Besides producing well-researched great books, he spends a lot of time with kids, reading, signing books, and sharing his love of baseball!

Matt Tavares at a literacy promo event at Fenway Park