Review of “Thirteen” by Kelley Armstrong

I read only a few of the twelve preceding books – and loved them, but just never got around to going the whole nine (or in this case, twelve) yards. But jumping to the thirteenth caused some problems: first because I often felt like I was missing some vital pieces of information, and second because, in spite of that sense of disorientation, I liked it so much that I wanted to go back immediately and read all twelve. And I didn’t want it to end! I felt almost like I did at the end of Maggie Stiefvater’s “Shiver” series. Although the Shiver Trilogy ends on a much sadder note, I experienced the same sense of loss over not wanting to say goodbye to the characters.

Fantasy books generally feature characters who live on the edge, and who pull us along with them on their fascinating journeys. Every moment is more intense than any experienced by “regular” characters. Even in murder mysteries, for much of the time, the characters are just going about their lives, getting coffee (or alcohol), shuffling paperwork, and trying to juggle jobs and relationships. But for paranormals, a large part of their existence just involves dealing with the fact of their differences and with all the interesting repercussions because of them. And also, since they are paranormals, the stresses, threats, and challenges they encounter are unlike any experienced by non-supernaturals. Even when they love, it can be fraught with problems: what if they fall in love across species lines? What if one is immortal and one isn’t? What if they try to have children? What if one dies, after the two of them have spent so many eons together? Or even: what is a simple kiss like, when it happens between two people who aren’t entirely human?

Thirteen is not without action, nor Kelley’s trademark sense of humor, nor explorations of love and loyalty and even a surprising look at Lucifer, but it clearly is a “wrapping up” kind of story. There is also – because we know it is the end of the saga, a generous dose of the bittersweet.

I don’t think anyone who has read the previous books will be disappointed that their favorite characters don’t make an appearance, because it seems like all of them are striding across the stage for us after the performance. But the main focus of this book is Savannah Levine, a half-witch with a rather distinguished pedigree. When we first met her in the second book she was only 12, and now she is 21 years old. Savannah takes some big steps toward growing up in this book, and ends up in a place I think readers will find satisfying.

My personal favorites, the werewolves Elena and Clay, play a role in Thirteen, but like everyone else, they are just sort of stopping in before the curtain closes to wave goodbye to everyone (metaphorically speaking).

Evaluation: I love Kelley Armstrong, but before reading Thirteen I recommend reading the preceding volumes (or at least books one, eleven, and twelve) in the Otherworld Series. I’m sad that the author is done with this series, but also I’m thinking she can now devote more time to her Nadia Stafford books, which can only be a good thing!

Note: If you miss the characters a lot, you can check out the Canadian television series “Bitten,” which featured many of them. 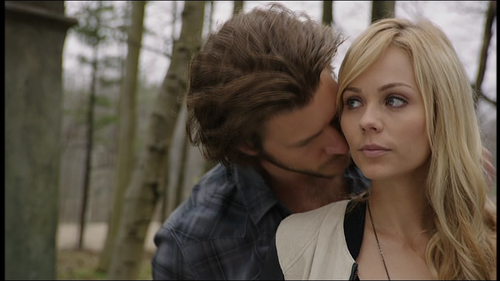 Clay and Elena in the “Bitten” series

11 Responses to Review of “Thirteen” by Kelley Armstrong