Review of “Gun, With Occasional Music” by Jonathan Lethem

Whenever we travel, one of our first stops is always the local indie bookstore. Once inside, I head straight to the Staff Recommendations. This book was one of those, and a book I never would have even noticed otherwise. (I think the indie in this case was the incomparable Politics and Prose, but I can’t be certain because we hit on more than one on our last trip to D.C.) 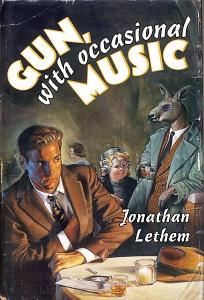 Gun, With Occasional Music (GWOM) is wildly different and creative. This is a scifi/noir/detective story, but those categorizations only begin to describe this book that, as a Newsweek critic wrote, “marries Chandler’s style and Philip K. Dick’s vision.” And indeed, the opening lines of the second chapter of Raymond Chandler’s final book, Playback, served as the inspiration for this one, as elucidated by the epigraph: “There was nothing to it. The Super Chief was on time, as it almost always is, and the subject was as easy to spot as a kangaroo in a dinner jacket.”

GWOM is set in a futuristic California in which evolved animals perform the menial tasks; where the population is kept subdued by legalized addiction to drugs referred to collectively as “make” (drugs like “Forgettol” and “Acceptol”); and where words in newspapers have been outlawed and replaced by only pictures. (Music is also acceptable for the expression of ideas. For example, when an evolved baby (called a “babyhead”) or perhaps a kangaroo pulls out a gun and points it at you, the gun might play a few bars of “ominous, pulsing violin.”) In this new world, criminals are frozen for the length of their term, citizens have to accrue karma points to stay out of trouble with the Inquisitor’s Office, and personal formulae for addictive drugs are kept on a computer at a “makery” where you pick up your supply of “make.”

Conrad Metcalf is a P.I. (here meaning, Private Inquisitor) who is, like most other citizens, addicted to “make” (but because of his job requirements, lays off the Forgettol, opting instead for Regrettol). He is looking into the murder of Maynard Stanhunt, who had hired Metcalf just a week earlier to investigate his wife, Celeste, a typical noir mystery “dame”:

“Celeste Stanhunt was a nice-looking woman who became something more when you were being paid to peek through her windows. To put it simply, there hadn’t been any need to undress her in my mind.”

Indeed, at one point, Celeste, in an attempt to manipulate Metcalf, “applied herself to the front of my body like a full-length decal…”

But like all noir, there is darkness, as with this scene reminiscent of the movie “Blue Velvet”:

“For Celeste, I knew as surely as our hips had ground together, danger was the intoxicant, and if there wasn’t danger there would have to be something else, some other malign aphrodisiac. I wanted to hit her as much as I wanted to fuck her, and she probably wanted to be hit as much as she wanted anything.”

Metcalf quit the Inquisitor’s Office to go private because, besides the usual noir mystery reasons of the protagonist being a loner and having an adverse reaction to authority, Metcalf maintained that “the inquisitors specialize in nifty solutions at the expense of truth.…” But one of Metcalf’s enemies points out Metcalf is no different:

“‘The Office and the makery – they’re one and the same to me,’ he said. ‘Make is a tool for controlling great masses of people. It homogenizes their response to repression, don’t you think? You consider yourself an outsider, a seeker of truth amidst lies, yet you’ve bought into the biggest lie that can be told. You snort that lie through your nose and let it run in your bloodstream.”

As Metcalf closes in on the truth of what happened to Stanhunt, there are a lot more deaths, as well as informative encounters with ewes, apes, and the kangaroo named Joey. Metcalf keeps losing his karma, and the only question is, will he also lose his life? Or has he already lost it?

Evaluation: This was fun, but a little too deliberately constructed for me to lose myself in the story. Nevertheless, I was starting to get invested in the main character by the end, and thus was disappointed when the author dropped the inchoate emo angle and went back to cold cynicism. And yet, it is cold cynicism that characterizes the genre, and as such, was entirely appropriate.

12 Responses to Review of “Gun, With Occasional Music” by Jonathan Lethem