Review of “The Lost Wife” by Alyson Richman

I haven’t read a book that focuses on the deleterious effects of surviving the Holocaust since my heart was torn out by New Lives:New Lives: Survivors of the Holocaust Living in America by Dorothy Rabinowitz. That book is non-fiction, but one wishes it weren’t. This book is fiction although based in fact, and while much of it occurs during the Holocaust, there is a great deal of attention paid to the pain that came after, for those who managed to live through it.

This story begins in 2000, when 85-year-old Josef Kohn and 81-year-old Lenka Maizel rediscover each other after 61 years. They had fallen in love and were married before World War II, but were almost immediately separated when the Nazis invaded Czechoslovakia and only Josef (and his family) could get out. Lenka refused to leave unless her family could go also. Although Josef intended to send for them soon, neither Josef nor Lenka realized that by 1939, when Josef left, it was already too late for the Jews.

Josef’s ship to New York was torpedoed, and he alone of his family survived. Lenka ended up at the “show camp” of Terezin, a model camp which served as the only one into which Germans would allow foreign observers, where her ability to draw enabled her to survive for a while by making propaganda pictures for the Nazis.

[Terezin was a special camp made to show the world how “well” the Jews were being treated. In order to accomplish this, however, the starving Jews who were there needed to be replaced constantly with new, healthier looking inmates. In all, nearly 90,000 were transferred from Terezin to points further east and almost certain death. Roughly 33,000 died in Theresienstadt itself. Fifteen thousand children passed through Terezin, with only around one hundred surviving, none under the age of 14.] 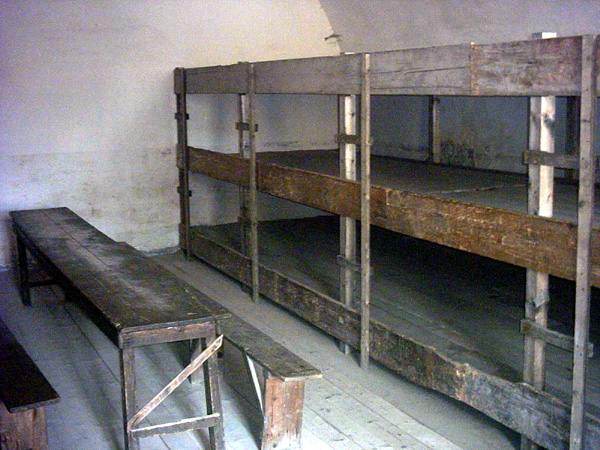 Terezin barracks at the concentration camp for “show”, where Jewish prisoners lived and slept.

In spite of all the death at Terezin, it was in fact not a death camp, where so many Jews went straight to the gas chambers. But finally, in November, 1944, Lenka and her family were shipped east to the largest and most notorious death camp at Auschwitz-Birkenau.

[While exact figures still are disputed, historians generally agree that the number of Jews killed at Auschwitz fell somewhere between one and one-point-six million. The head of the camp, however, Rudolf Höss, testified to the War Crimes Investigation Unit of the British Army of the Rhine, “I personally arranged on orders received from Himmler in May 1941 the gassing of two million persons between June-July 1941 and the end of 1943, during which time I was commandant of Auschwitz.” Most but not all of the victims were Jews.]

Lenka survived this ordeal also, and ended up marrying an American soldier she met after the war while she was in a displaced persons camp.

Josef, meanwhile, went on to marry a woman he met in New York, a woman who was haunted her whole life by having left her family behind in order to survive. Ironically, it is just that nightmare that Lenka wanted to avoid by not leaving with Josef when she could have, and staying back with her family.

Although both Lenka and Joseph came to love their second spouses, their hearts and minds had been broken, and the relationships they had with their new spouses was never anything like the love they had with each other.

Then, in 2000, both second spouses having died, they met again, in the most improbable circumstances, and after being convinced each other had perished long ago. One could only hope they could find some healing with one another, and realize the words spoken at their wedding so many years before: “I am my beloved, and my beloved is mine.”

Discussion: What we see so clearly in this novel is how the Nazis destroyed minds as well as bodies. Although the protagonists survived the war, they never recovered psychologically from their ordeal.

I appreciated the fact that although the author has Lenka go to Terezin, where conditions were much better than in other camps, she also shows life [sic] in Auschwitz, so that readers without knowledge of the Holocaust can see what the experience was like for most Jews who were not “fortunate” enough to spend time in Terezin.

Some of the characters in the book were actual people, such as Lenka’s friend Dina Gottliebova, the artist Bedrich Fritta and the artist Petr Kien. Lenka speaks often in the book of the work done with children in Terezin, and there is a book by Hana Volavkova that contains images of their surviving art work and poetry. Called I Never Saw Another Butterfly, it is named after a poem by Pavel Friedman, a young teen who was incarcerated at Terezin and was later killed at Auschwitz.

Evaluation: This is a heart-breaking and heart-warming book with an unforgettable story. But in addition, this book is important for several reasons:

It provides a human face to the incomprehensible numbers of people railroaded to their deaths by the Nazis, and shows us quite precisely what was endured and what was lost, and why it was so hard for the weakened and terrorized victims of the Nazi juggernaut to offer physical resistance.

Richman shows us not only one face of the concentration camps, but two, making it easier for readers to understand how and why some survived and some didn’t.

And it is important because it says to us, who have the leisure and freedom and strength to sit and read, to play, and to enjoy our children and our futures, that we must be eternally grateful for our blessings, and not forget those who had those blessings taken away from them.

28 Responses to Review of “The Lost Wife” by Alyson Richman