Review of “The Language of Flowers” by Vanessa Diffenbaugh

This enchanting story which takes place in San Francisco focuses on both the foster-care system and the language of flowers inherited from the Victorian Age. It is told in alternating chapters that chronicle Victoria Jones’s life at age eighteen when she is released from her last institution, and Victoria as a child, having been abandoned by her mother at birth. 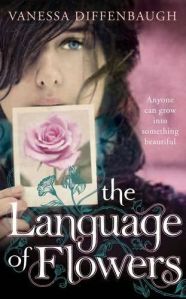 Victoria has lived in thirty-two homes by the time she is placed, at age ten, with Elizabeth, a woman living alone and running a grape vineyard. Victoria is defensive, angry and distrustful. She gets physically sick if people touch her, and shuns attachments. And in fact, she is afraid to love, afraid above all to be hurt yet again. So in a desperate and counterproductive attempt to protect herself, she tries to sabotage love when she finds it. If she can destroy the affection that is directed toward her, she will not be vulnerable to being destroyed once again herself.

Elizabeth is the first person who seems to understand what Victoria is doing, and who resists Victoria’s efforts to push her away. Elizabeth breaks through to Victoria by teaching her the language of flowers, and through this new language, they are able to build a relationship. But Elizabeth has problems of her own, and Victoria mistakes them for rejection of her. She acts out against Elizabeth in a violent way that haunts her for years, and which she thinks shows that she is “unforgivably flawed.”

When, years later, she encounters a boy who seems interested in her, she can’t accept it, and strikes out at him again and again.

It is only through her knowledge of the language of flowers, which she puts to use in a floral shop, that she is able to learn how to connect with people again. Like moss, she discovers, love can grow spontaneously, without any roots at all.

Evaluation: This is a wonderful book. I felt like I actually knew the main characters in this book, and could picture them, although they really weren’t even ever described. The information on the meaning of flowers is fascinating, and the author includes a glossary at the end of the book. She also includes information on the foster care system in the U.S. This book will warm your heart, even as it gives you an understanding of the heartbreaking dilemma of children whom nobody seems to want, and of the romantic and fascinating method of communicating through flowers. Highly recommended.

Published by Ballantine Books, an imprint of the Random House Publishing Group, 2011