Review of “The Cardturner” by Louis Sachar

This young adult novel by the author of Holes combines a charming coming of age story with an introduction to the game of bridge. 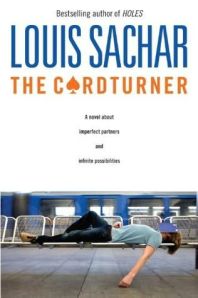 My husband has been trying to teach me to play bridge for over ten years. We have over one hundred books on bridge, including my personal (and most valued) favorites, Bridge for Dummies, and Idiot’s Guide to Bridge. It’s a really hard game.

I loved this book, but I have no idea how I would have reacted to it if had I no familiarity at all with the game of bridge.

The story is narrated by seventeen-year-old Alton Richards, who is hired by his seventy-six-year-old rich uncle, Lester Trapp, to be a “cardturner.” Lester has gone blind from diabetes but still wants to play bridge. Alton drives Lester, or “Trapp” as he is called, to his bridge club four times a week. From watching the game while turning his uncle’s cards, Alton gradually takes an interest in bridge himself.

Alton begins to practice at home with his eleven-year-old sister Leslie, who gets enthused herself about the game. Alton also starts playing bridge with Trapp’s former cardturner, seventeen-year-old Toni. Although Alton likes Toni, she is more aggressively pursued by Alton’s best friend Cliff, the same “best friend” who took away the girl Alton previously liked, Katie. But Alton hangs on to his connection to Toni, through bridge and through Trapp.

It turns out that Trapp’s favorite bridge partner used to be Toni’s grandmother, Annabel. Alton knows that Trapp and Annabel made a great bridge team, but they never got to compete in the national championships. Toni and Alton are determined to change that, even if it means believing in miracles.

Evaluation: This is just the sweetest story, with or without the bridge. On the bridge, I think Sachar does a great job of setting up the book so that the reader can decide how much bridge to read about: the author (as Alton) inserts a picture of Moby Dick before optional passages that go into detail about the hands, and indicates that these sections aren’t necessary for the plot if the reader wants to skip them. (The reason he puts the image of Moby Dick is meant to be a humorous reference to how Alton regarded all the specifics about whales in Melville’s book.) The author even attaches an appendix under the name of a fictional bridge expert, Syd Fox, to explain some bridge terms used and card tricks made in the novel.

Sachar’s love of bridge comes through in spades (so to speak), and with a main character/narrator who has a heart like a diamond, there will be no need to club you over the head to get you to like this book. I liked it a lot, and I think you’ll follow suit.

Published by Delacorte Press, an imprint of Random House, 2010

19 Responses to Review of “The Cardturner” by Louis Sachar