This is book #6 of the stand-up comedy/mystery/dog-related legal procedural series featuring lawyer Andy Carpenter and his golden retriever Tara. 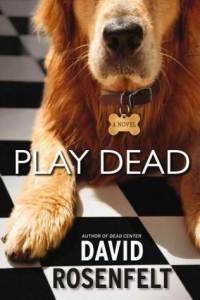 Andy is asked to save a golden retriever in the animal shelter “condemned” to “death row” since, in New Jersey, a dog which has bitten someone must be put down unless reprieved by the owner. But it is clear the alleged owner is abusive, and that this dog, named “Yogi,” is sweet and loving.

Andy takes the case and saves Yogi, but “Yogi” turns out not to be “Yogi” at all, but “Reggie.” And that’s just the beginning of a conspiracy involving false identity, bribery, smuggling, money laundering, and false imprisonment.

Evaluation: Once again, Rosenfelt provides laugh-out-loud moments with a good legal procedural story. If you need a diverting book, you can do a lot worse than the Andy Carpenter series.

This is the second Andy Carpenter book I have read, and I thoroughly enjoyed both. Sometimes when the main character is a lawyer, the author takes creative license with the rules of civil or criminal procedure to enhance the drama of the situation. That is always annoying to lawyers (at least to this one), but even though these books are more comedy than deep drama, Rosenfelt avoids that kind of error. In this book, it was especially difficult to avoid that kind of error since one of the dogs in the story had to “appear” in court to “testify.” The judge’s ruling to view the dog’s behavior as a part of the proceedings is plausible, if not entirely probable. In all, a fun way to pass the time.

13 Responses to Review of “Play Dead” by David Rosenfelt