Review of “Bitten” by Kelley Armstrong

If you, like my husband, are appalled that I am reading a werewolf series and would never consider doing so yourself, I want to stress that you are thus depriving yourself of an excellent metaphorical plot device to explore the varied ways in which people reconcile themselves to their own animalistic tendencies, and to gain insights from a comparative behavioral study that illuminates human interactions. 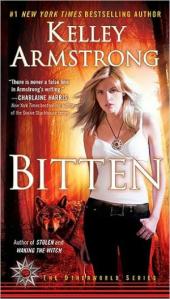 Elena Michaels is a 32-year-old living with her boyfriend Philip in Toronto, and is the only female werewolf in existence.

She left her werewolf pack fourteen months earlier because she wanted a “normal” life, but it’s more difficult than she imagined; at least once a week, she needs to sneak out in order to “change” and go run. When Elena was twenty she was bitten by her former boyfriend, Clay, and resents him for it. It was Clay who first her brought her to the Pack which is led by Jeremy, Clay’s stepfather. Although Elena stayed with the pack for nine years, she longed to be part of the human world:

“I didn’t choose this life and I damn well wasn’t about to give into it, surrendering every dream of my future, ordinary, mediocre dreams of a home, a family, a career, and above all, stability. None of that was possible living as a werewolf.”

But when Jeremy calls her back for an emergency threat from non-Pack werewolves (known as “mutts”), Elena has to obey. She travels to the Pack’s estate at Stonehaven in remote upstate New York, where Clay – still in love with her – tries to renew their relationship. In the course of helping Jeremy fight the growing threat from without and fending off her attraction to Clay, Elena is forced to come to terms with her own nature, and make the choice between the two radically different societies that appeal to each part of her.

Discussion: First, why did I start this series? I loved the (human) mystery series by this author about Nadia Stafford, the resort owner who works as a hit woman on the side to earn extra money. This is an author who is innovative, who incorporates strong women into her plots without sacrificing softness and sex, and who is an entertaining writer. I wanted to see more of her work.

Further, this is not just another paranormal werewolf series. Armstrong is interested in interactions among wolves, but she also employs this theme to examine the question of what it means to be human. She uses the idea of the Pack to interrogate the nature of families, and compares the love and loyalty of the Pack to the abusive families that some of the wolves experienced as humans. Because the humans spend time as animals, they are also able to learn and appreciate the full use of the senses when in both forms, and of social hierarchies and how to respect them. The fact that Elena is a strong female is analyzed in all of its aspects, from the way it turns some men on and enrages others, to the way she gets consistently underestimated, to the sense of empowerment that it gives Elena, who spent so much of her early years being victimized. This really is an intelligent book, and as for hot sex? Armstrong could have written the book on it. Wait! She did!

25 Responses to Review of “Bitten” by Kelley Armstrong