TLC Book Tour Review of “On China” by Henry Kissinger

Note: This book is reviewed as part of TLC Tours by my husband Jim.

Chinese written history goes back more than 2500 years. Its earliest myths speak of a Yellow Emperor, who does not establish or found the civilization, but rather restores order to an already ancient kingdom. Throughout their long history, the Chinese thought of themselves as the center of the world, the “Middle Kingdom.” The Chinese believe their empire grew not from conquest, but rather by absorption of surrounding barbarian peoples who fervently wished to become Chinese. The Chinese persisted in perceiving themselves as innately superior to other ethnicities throughout their long history until much of their country was colonized by Europeans and the Japanese in the 19th century.

Henry Kissinger’s On China begins with a synopsis of that long history because he believes it is necessary in order to understand the path of Chinese diplomacy in the modern world. His account details Chinese diplomacy from the 19th century through the present day, with an emphasis on the period after the founding of the People’s Republic in 1948. He credits modern Chinese leaders from Mao Zedong through Deng Xiaoping through Jiang Zemin with having great patience and an extraordinarily long-term view of world history. Zhou Enlai, Kissinger’s counterpart under Mao, when asked what he thought of the French Revolution, replied that “it was too early to tell.” 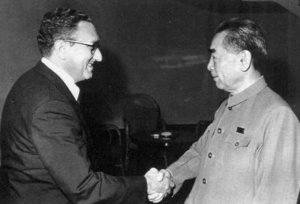 Henry Kissinger and Zhou Enlai in 1971

An organizing theme in Kissinger’s analysis of relations between China and the West is the contrast between the board games of wei qi and chess. [Wei qi is the game known as “Go” in English.] The Chinese approach, like good strategy in wei qi, requires the avoidance of encirclement. The Western powers historically have sought head-on clashes with clear winners and losers, more like chess. Kissinger uses this analogy to describe Chinese behavior in the Korean War, the Taiwan Strait crises of the 1950’s, and China’s 1962 war with India.

Wei Qi, or Go game board

Not renowned for his humility, Kissinger might have subtitled this book “How I personally Saved Western Civilization.” Nevertheless, he is an appropriate chronicler of recent Chinese history since he (along with Richard Nixon, Mao, and Zhou) may have had as much to do with China’s “opening up” to the West as any other human being. The implicit evaluations in his account are somewhat influenced by his personal interactions with the other dramatis personae. For example, Kissinger seems to admire Mao, crediting him with great wisdom despite the fact that his Great Leap Forward and Cultural Revolution resulted in starvation or political persecution for millions of Chinese, in addition to stultifying China’s economy for at least a decade.

Kissinger argues that China, unlike the Soviet Union, has not attempted to expand communism beyond its historical territorial limits. China’s principal strategic problem since the founding of the Peoples’ Republic has been that it is surrounded by unfriendly neighbor states that claim some of the territory historically ruled by China. For example, the Soviet Union sought to control Outer Mongolia despite its ostensible communal bonds of communist ideology. In addition, India and China have long disputed their boundary in the Himalayas, and even fought a short nasty war over its location in 1962. In Kissinger’s view, China’s intervention in the Korean War was not motivated so much by a desire to protect a fraternal communist state as it was a straight forward defense of its own frontier.

Nixon and Kissinger were relatively indifferent to Chinese internal politics, and were able to reach an accommodation with Mao over many international issues because of their mutual distrust of Soviet expansionism. China did not intervene in America’s Vietnam War in any meaningful way because it valued its growing relationship with the United States. In fact, China and Vietnam are historical rivals and even fought a brief war with each other once the United States abandoned the area.

The most difficult issue between the United States and China has been the status of Taiwan, which China views as its own breakaway province. Kissinger and Nixon had to contend with a powerful “China lobby” in the U.S. Congress that favored recognizing the Nationalist government in Taipei over Mao’s government. Nevertheless, Kissinger was able to reach an accommodation with the communists because of their patience and long-term approach to international relations. The temporary “solution” was embodied in the so-called Shanghai Communiqué, whereby the United States recognized that there was only one China, which included both the mainland and Taiwan. For their part, the Chinese communist government was willing to wait (Mao said for “a hundred years”) to settle who was to rule that entire single country. Mao did not renounce the potential use of force to unite the country and tested Western resolve with several probes by artillery shelling two offshore islands controlled by the Nationalists. However, communist forbearance from escalating the violence has made it possible to live in relative peace. 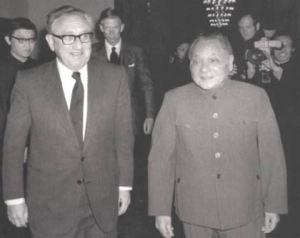 Kissinger and Deng Xiaoping in 1985

Mao’s successor, Deng Xiaoping, pretty much abandoned the centrally controlled communist economic ideology in favor of a more market-driven model. As a result, China’s economy has made great strides. Deng and his successors, however, have maintained tight control over the political process. China remains a one-party state, with all political power residing in the “Party,” even if it remains communist in name only.

Kissinger muses on the tension between the “realist” and “idealist” schools of American foreign policy. Complicating the current relationship between the U.S. and China has been the idealistic movement in U.S. policy to push for the recognition of “human rights” in foreign countries, something that probably never occurred to Kissinger when he was in power. Ever pragmatic, Kissinger recognizes that a realistic approach to policy must be aware of the power of idealistic concepts to influence behavior. The Chinese, on the other hand, highly resent any effort by foreigners to influence the internal affairs of China.

Mutual distrust of the Soviet Union thrust the U.S. and China together. One might expect that the disintegration of the U.S.S.R. would provide the occasion to cease cooperation. In fact, one of the tensest periods in U.S.-China relations occurred in the aftermath of the collapse of the Soviet Union when the Chinese brutally suppressed their own people in the Tiananmen Square riots. Careful diplomacy by George H. W. Bush’s government assured the Chinese that the U.S. would not interfere with China’s internal politics, although it had to make some disparaging remarks to assuage American domestic opinion. Thus, despite the significant differences in perceptions and approaches, the U.S. and China have avoided armed conflict with one another since 1954 and have become highly integrated with each other’s economy.

In the final chapter, Kissinger discusses the difficulty in maintaining peaceful relations with China stemming from the inevitable tension caused by overlapping of national interests of the two nations in East Asia and the Western Pacific. Major challenges to dealing with China in the future will be how much the U.S. attempts to prod the Chinese toward establishing democratic institutions and how aggressively China asserts its new found economic and military power in that area. Kissinger remains cautiously optimistic that competent diplomacy on both sides can avoid serious conflict.

Evaluation: Although one can make fun of Kissinger’s enormous self-confidence, he really knows his stuff. This book is articulate, accurate, probing, and comprehensive. I highly recommend it.

We're into reading, politics, and intellectual exchanges.
View all posts by rhapsodyinbooks →
This entry was posted in Book Review, Tour and tagged Book Review, Tour. Bookmark the permalink.