Review of “All Clear” by Connie Willis

All Clear is in essence “Part Two” of Willis’s previous book, Blackout (see my review, here). In my opinion, there is no way All Clear can (or should) stand alone. 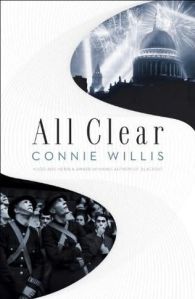 The titles of the books refer to the status of war alerts in Britain in World War II, but in addition, one could say that All Clear does in fact make “all clear” the tangled web of stories that makes up the two books.

In All Clear, the saga continues about the lives of three time travelers from the year 2060: Mike, Eileen, and Polly, all students of history. They have come back to London during World War II to witness three key aspects of the war years: the heroism of ordinary Britons from Dover who helped rescue soldiers from Dunkirk, the evacuation of children from London to the English countryside, and the ways in which ordinary Londoners coped with the “Blitz” (the sustained bombing of Britain by Nazi Germany between September 6, 1940 and May 10, 1941).

The three have been unable to get back to the year 2060 when they were scheduled to return, and are obsessed with the fear that they might have influenced history deleteriously, and that’s why the “doors” they must take back to the future won’t open for them.

In the course of trying to get back, as well as trying to survive the bombings of London until they do so [some thirty thousand civilians died in the Blitz!], they learn invaluable lessons on loyalty and love that transcend space and time, and on the real nature of heroism.

Mike had been looking for historical “heroes” but as he came to discover,

“. . . maybe England was the front, and the real heroes were the Londoners sitting in those tube stations night after night, waiting to be blown to smithereens.”

And Polly, who wanted to study how Londoners “coped,” found that,

“The day after they’d watched half their city burn down around their ears, Londoners hadn’t sat there feeling sorry for themselves. Instead, they’d set about putting out the fires that were still burning and digging people out of the rubble. They’d repaired water mains and railway tracks and telephone lines, shown up at their jobs, even if were they worked was no longer there, swept up glass. Gone on.”

Children in the East End of London, made homeless by the Blitz

But the author, who so cleverly and poignantly brings this everyday heroism to life in these two books, says it best in her epigraph. Her dedication at the beginning of All Clear reads:

WHO WON THE WAR.

“To do something for someone or something you loved … wasn’t a sacrifice at all. Even if it cost you your freedom, your life, your youth.”

Evaluation: As I started All Clear, I was wondering, why did she need two books to tell this story? But by the time I finished and was wiping away my tears while once again admiring Willis’s cleverness, I was hoping fans would prevail upon her to write a third!

13 Responses to Review of “All Clear” by Connie Willis