Most books on George Washington cover only selected aspects of his life: for example, his role in the American Revolution, or his presidency. Ron Chernow gives us Washington’s whole life in one book, which allows us to get a sense of how Washington evolved over time to become who he did. Chernow’s goal is to turn “Washington the Myth” into “Washington the Man,” and I believe he accomplishes at least that much and more.

Still, you may ask, why would one want to wade through more than 800 pages to read all about George Washington? There are a number of very good reasons.

1. You can begin to understand how different the actual history of the Founding Fathers (Washington and others as well) is from that which is promulgated in schools and in popular culture. You will find, in addition to their good qualities, that the Founders had a number of less-than-admirable traits. For example, Washington could be harsh and demanding, expecting the same standards of perfection he had for himself by all who worked for him, including slaves. He was deliberate and exacting, “with a mind neither quick nor nimble,” groping his way to decisions – not always the best trait to exhibit on the battlefield.

2. You can get a new perspective on current politics from glimpsing at the savagery and vituperation of the founding period. If you think our Congress is more polarized than it has ever been, and that the “dirty tricks” of candidates have gone beyond decency, you haven’t read enough about Jefferson and Madison. Later Jefferson added Monroe to his coterie of followers willing to do his dirty work.

3. One learns how much the 1787 Constitution omitted or left vague, allowing for its provisions to be contested even down to the current day. Article II, dealing with the president, was particularly thin. As Chernow points out, Washington basically forged the executive branch of the federal government. He set a host of precedents, ranging from what we should call the head of government, to shaping executive privilege, to establishing a benchmark for governmental appointments and administration. As Chernow notes: “Washington’s catalog of accomplishments was simply breathtaking.” 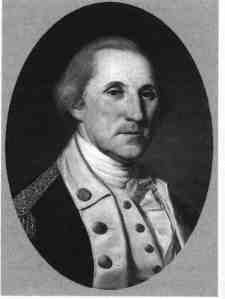 George Washington as a Young Man

4. One can discover the roots of politics and policies in this country relating to religion, Native Americans, “manifest destiny,” and most especially, the relationship between blacks and whites. When the country was forming, most of the founding fathers were slaveholders, and only Washington had the respect and regard and trust of the country to do something about it – that is, if anyone could have. But in the end, he, like other founders, could not bring himself to part with the baronial existence that he coveted for so long and worked so hard to achieve. Moreover, although he had abolitionist sympathies, he self-righteously believed that his provision of room and board and clothing for slaves was a fair trade for their forced labor from sun-up to sundown. [In his will, he did make a provision that his slaves would be freed upon Martha’s death. But because his will was published and his slaves knew about it, Martha did not feel safe. Thus she freed them before her death, a year after her husband died.]

As for Native Americans, Washington, like many after him, could never quite understand that the attacks on Americans by Indians may have had some justification, considering that they were being pushed off of their land. Rather, he authorized massacres and scorched-earth practices by his armies as fit punishment for assorted cruelties practiced by the Indians on “our unhappy, frontier settlers…”

5. You will gain insights into the problems consequent to antipathy for taxation – one that has plagued our nation from the start. Washington constantly fretted about the country’s “free rider problem” – i.e., the unwillingness to make sacrifices for the public good, letting greed and individual needs determine one’s own behavior and politics, even while desiring and often demanding benefits that automatically accrue to all persons if provided for any one person. [Examples include military protection of a territory or clean air or good roads or libraries. These are goods generally only available through contribution or taxation.] In Washington’s day, prior to our federally constituted government, it was hoped that individuals would have sufficient “patriotic” incentive to contribute to the common good. But as Washington discovered, it is generally necessary to result to compulsion to counteract the tendency of individuals to act out of a perceived sense of self-interest. Thus, for example, his troops went without coats or food or even shoes, “resembling a horde of unkempt beggars.” Yet local farmers had plenty of produce; they sold it to the British who could pay in solid pounds sterling rather than the debased Continental currency.

6. You will discover that managing one’s image is not a new phenomenon, and Washington was a consummate expert at it. Washington was obsessed with what others thought of him, and even carefully arranged for his posthumous reputation. One of the best stories Chernow tells about Washington’s handling of his image has to do with his appearances in public while president. Chernow recounts:

“Aware of how impressive he looked atop a white mount, he once instructed a friend to buy him a horse, specifying that he ‘would prefer a perfect white.’ … So taken was Washington with his unblemished chargers that he had grooms rub them with white paste at night, bundle them in cloths, then bed them down on fresh straw. In the morning the hardened white paste gleamed, its paleness accentuated by black polish applied to the horses’ hooves. For command performances, the animals’ mouths were rinsed and their teeth scrubbed.”

It is impossible to review for you all the many insights that comprise this book, but I have selected some highlights.

There are five main points I take away from this biography:

1. Washington quite possibly had the opportunity to abolish slavery, but couldn’t bring himself to do it. He did not want to give up his own luxurious life; nor was he psychologically capable of risking widespread disapproval of his actions. [Even Hamilton, a committed abolitionist, declined to bring the issue up at the Philadelphia Constitutional Convention because of his unwillingness to jeopardize ratification. But Hamilton couldn’t have gotten very far in any event: he did not inspire the reverence and respect that Washington did.] During the Revolutionary War years, Washington wrote extensively on the reprehensible self-interestedness of the colonists, but in this most important test of character, his own behavior wasn’t much different.

2. One can see a clear connection between Washington’s personality and his mother’s treatment of him: she was cold, punitive, and judgmental, and he was never good enough for her. She never acknowledged any of his achievements. She was frugal, demanding, a martinet, and hypercritical. He grew up overly sensitive to criticism, with a lifelong need for approval. Moreover, he was constantly struggling to suppress rage. He spent money freely, but kept track of every cent, and never thought he had enough. He too could also be a hypercritical martinet, especially when it came to his slaves. But Washington worked hard to overcome these traits, and in particular, was sure to issue praise for the accomplishments of his men in war and in the government, albeit sparingly.

3. Washington could not have achieved what he did were it not for the brilliance and generosity of Alexander Hamilton, but Hamilton could not have contributed much at all were it not for the patronage and influence of Washington. Additionally, Hamilton was proud and headstrong and impetuous and lacked the equanimity to translate his brilliance into action without the tempering influence of Washington. It is fitting to examine their achievements through a stereo lens.

4. Washington’s emotional restraint with those he cared about contributed to a sense of awe in his presence (which he definitely tried to cultivate the better to fulfill his leadership roles), but it cost him a great deal, perhaps representing his ultimate sacrifice for his country. Many of his “surrogate sons” and “good friends” for whom he had performed many favors turned on him viciously when something went wrong. Only the Marquis de Lafayette was willing to give him something close to “unconditional love,” but Lafayette returned to France after the War. After an all-too-brief post-War visit by Lafayette to Mt. Vernon in 1784, Washington never saw him again.

5. Chernow evinces yet more data testifying to Thomas Jefferson’s treachery. Although Jefferson was relatively successful in throwing wrenches into the careers and memories of Alexander Hamilton, Aaron Burr, and John Adams, he thankfully did not make much of a dent in the reputation of George Washington, though not for lack of trying. Jefferson – that founder who gets so much of our respect for having penned The Declaration of Independence (even though much of his work was editing rather than original production) – could be devious, ruthless, and relentless in his desire to impose his own views and exact vengeance on those who disagreed with him.

Evaluation: Chernow had a much easier task when he wrote about the life of Hamilton, who was brilliant, impulsive, emotional, and passionate about whatever he did. Washington, a quiet, deliberate man, is a much harder subject. Moreover, Martha didn’t help matters by burning all their correspondence after his death. Nevertheless, Chernow does an admirable job trying to reveal the man behind the mask. If you want to know why Washington was ultimately a great man, in spite of his shortcomings, you can do no better than this book. If you are interested in Washington’s life but don’t want all this depth, I would recommend David Hackett Fischer’s Washington’s Crossing.

Note: Winner of the 2011 Pulitzer Prize for Biography

This book is reviewed as part of TLC Tours.

We're into reading, politics, and intellectual exchanges.
View all posts by rhapsodyinbooks →
This entry was posted in Book Review, Tour and tagged Book Review, Tour. Bookmark the permalink.

21 Responses to TLC Book Tour Review of “Washington: A Life” by Ron Chernow