Review of “When the Wind Blows” by Raymond Briggs

When the Wind Blows is a 1982 graphic novel depicting a nuclear attack on Britain by the USSR from the point of view of a benighted retired couple, Jim and Hilda Bloggs. Although some reviewers have complained that it is dated because the Cold War is over, I think one can easily imagine the same scenario with a different set of combatants. That must be the case, because I found it very frightening to read! 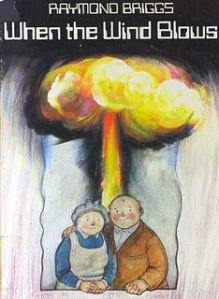 The pictures (up to 30 panels a page) are mesmerizing and the text is at turns humorous, poignant, and horrifying. I don’t think it spoils it to tell you that in the end, the couple dies of radiation poisoning. The story and the graphics are memorable whether you know what ultimately is to happen or not. This cautionary tale is similar to, but actually scarier than the dystopic books by Susan Beth Pfeffer. I highly recommend it for all those out there who are in dread of an apocalypse; Briggs has captured one brilliantly.