Note: No spoilers are contained in this review.

It will not reveal the plot to note that Nigerians have been seeking asylum in great numbers at least since 2003 because of a war to control the country’s vast oil resources. HRW (Human Rights Watch) has documented acts of brutal violence and a profound climate of fear and insecurity in affected areas. 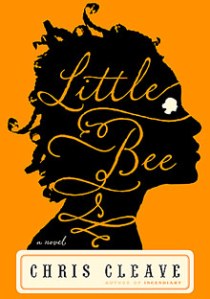 Cleave begins his tale of Little Bee – a young girl from Nigeria who had the misfortune to live in a village directly on top of a rich oil field – in a British detention center for illegal immigrants. This is where those who escape to Britain without “papers” were sent, lest they be a “drain” on society. [It should be noted here that not all of the people who go to other countries illegally are refugees in fear of their lives. No matter who they are or why they are there, however, there are serious lapses of oversight in terms of how they are treated, and how their cases get evaluated. See for example, this collection of articles in the New York Times about mistreatment in detention centers.]

Little Bee has been in the (fictitious, but representative) UK detention center for two years, since she was fourteen. Four of the girls are abruptly told they are able to leave, and they can call for a taxi. Little Bee calls a number she has been carrying with her for two years, that of Andrew and Sarah O’Rourke in Kingston-upon-Thames.

From thence forward, the story alternates between the voices of Little Bee and Sarah O’Rourke. They tell the stories of their lives, and how they happened to be interconnected. We also hear a great deal from Charlie, Sarah’s little boy, who likes to dress as Batman and divides the world into “baddies” and “goodies,” so he can vanquish the former and protect the latter. In one sense Charlie serves as a bit of comic relief, but in another he is like a Greek chorus, offering commentary on the plotline.

In the course of the story, you learn about the circumstances by which Little Bee got to know the O’Rourkes, how she got to the immigration center, and what her fate will be. And you also get a look at how different people in the UK react to her situation.

Although – especially without a lot of information on what the story is about – you might suspect this of being a bleeding heart story, it is not so at all. None of the “goodies” are in fact all good; nor are the “baddies” all bad (although some of them come pretty close). But the facts that Cleave brings to your attention about Nigeria and about detention centers are undeniably true, and that’s what I believe you will take away from this story. It’s yet another good reminder of how truly fortunate we are in the West.

Evaluation: I didn’t get as emotionally invested in this story as I thought I might. I think part of the problem was with the author’s portrayal of the Nigerians who preyed on innocent villagers; they seemed much too caricatured to be real for me. Little Bee herself seemed too emotionally competent, although I suppose one would grow up fast in her situation. Or she could have been so phlegmatic because of shock or denial: reasonably believable coping mechanisms. But as a result, I didn’t really feel her pain. I wouldn’t want to have to go through another experience like reading The Blue Notebook, in which the pain just sears into you, but I think something in the middle would have been better for this book. Cleave has an important story to share, and I think it could have had more impact.

The prose is often lovely, and there are some wonderfully trenchant observations on marriage and morality that I am reluctant to quote since they would amount to plot spoilers. This is a thought-provoking book, and has much in it that would generate discussion for book clubs. Many of you will consider, as I did, what you would have done in circumstances similar to those faced by Sarah and Andrew.

20 Responses to Review of “Little Bee” by Chris Cleave