Bernice McFadden reports in an interview that she had 73 rejection notices for this book, and that when it was finally published in 2000, it was pigeonholed as a “black” book and marketed strictly to African American readers. Other reviews may point out there are some mysteries associated with this shattering and touching story, but to me, the publishing and marketing decisions are the biggest ones. 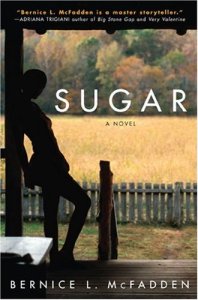 In 1955, Sugar Lacey moved to Bigelow, Arkansas after an unhappy childhood with no parents and no prospects aside from prostitution. This is a woman who has spent her life in emotional isolation and in pain, and it shows in the insolence and defiance with which she now confronts the world that scorns her. My heart went out to the girl inside the woman who wanted so badly to love and be loved, that when the opportunity came her way, she was afraid, and only wanted to run.

The women in the town reject Sugar without even knowing her; they resent and fear the effects her tight clothes and her flowing wigs will have on their men, and they allow this fear to overwhelm any Christian tendencies they claim to have. But Pearl Taylor, who lives next door, is drawn to her new neighbor; Sugar reminds Pearl of her daughter Jude, who was brutally murdered fifteen years before. A relationship between the two women that begins reluctantly but grows into something mutually affirming and supportive changes both of their lives. Pearl seeks to bring something of Christian redemption to Sugar, and Sugar strives to bring some of the joyfulness back to Pearl that was lost when Jude was killed.

But Sugar’s past keeps chasing after her, because victimizers never forget an easy mark. Pearl, as a force of good, has to do battle with one of Sugar’s old “johns,” a personification of evil, for Sugar’s body and soul.

Discussion: In Sugar, there are elements of other authors and books that come to mind: a little of the poetic obscurity – especially in the beginning – like Toni Morrison; the improbable friendship of Celie and Shug from The Color Purple; and the petty and carping women’s card club from The Help that could be a photographic reverse negative of the group that gets together in Sugar. Most poignantly, the character of Sugar is reminiscent of the character of Bess from DuBose Heyward’s novel Porgy. In Sugar, all of these influences or similarities are blended into a unique medley to create a different and lovely song, albeit one played out in the sorrowful and contemplative notes of the blues, with some enraptured riffs of jazz from time to time.

Evaluation: There is so much I recognized in this book: grief, fear of love, cruelty, dignity, pettiness, compassion, and all kinds of strength in women who didn’t even know they had it. McFadden is a truly talented author. It’s a shame it is only now, on the ten year anniversary of her initial publication, that she is getting some recognition.

21 Responses to Review of “Sugar” by Bernice L. McFadden