Review of “From Dead to Worse” by Charlaine Harris

This is Book 8 in a delightful paranormal series featuring Sookie Stackhouse, a barmaid/waitress in Bon Temps, Louisiana. This particular book has a bit less charm that the previous books, as the author seems to have gotten waylaid by expanding the supernatural world, and by getting bogged down by the convoluted and corrupt politics of the werewolves and vampires. It’s beginning to sound like Chicago, for goodness sakes! 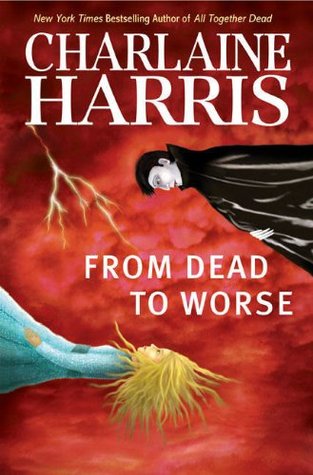 In From Dead to Worse, Sookie gets in the middle of two internecine conflicts, both of which stem in part from the devastation wrought by Hurricane Katrina. Surviving werewolves and vampires from the areas hardest hit have moved into other territories, and are contesting the extant leadership. Sookie’s telepathic abilities enable her to help mediate both situations, although there is a great deal of blood shed before they are resolved, and of course the “bad guys” in both groups are now out to kill Sookie.

Also in this book, Sookie finds out that she has a great-grandfather who is a prince in the fairy world. Her paternal grandfather was half-fairy, and this fairy blood helps account in part for Sookie’s appeal among all the male supernaturals, who find the fairy essence intoxicating. [This was a disappointing development to me; I thought it should have been sufficient that Sookie was not only good-looking, but independent, not afraid of supernaturals (“supes”), bright, talented, loving and loyal. The implication that the basis of her attraction is magic is demeaning to Sookie in my opinion and shows not enough faith in her character. On the other hand, it goes a long way to explain why THIS particular human above all other humans has attracted the interest of so many supernaturals.]

In spite of all this appeal, however, Sookie continues to have man troubles. Largely though, this is a result of her own stubbornness and ego. She even breaks up with Quinn because he gives too much time to his mother and sister instead of to her! (So in another sense, yeah, maybe she does require some fairy blood to make these guys keep hanging on in spite of her behavior!)

As the story draws to a close, the once-powerful vampire area of Louisiana gives in to the reality of their diminished status after Hurricane Katrina and the death of so much of the leadership. Eric makes the decision to align with the Las Vegas vampires, who have a great deal of money and power (in large part because of all the people in Las Vegas willing and eager to have sex with vampires and perhaps a bit of a tribute to “The Godfather” saga). A last ditch attempt by an attendant of the late Queen of the Louisiana vampires to kill Eric and the handsome king from Las Vegas, Felipe de Castro, is thwarted when Sookie saves their lives.

Evaluation: This book doesn’t have the usual amount of sex, social commentary, and tongue-in-cheek humor as the previous books in the series. The author’s heavy-handedness is not as effective as her light touch in the first books. I hope her subsequent contributions to this series get back to what made the beginning so fun: Sookie’s moxy, faith in the goodness of the world, loyalty and love; and Harris’s subtle yet effective jabs at the hypocrisy of those who discriminate against others.