Monk’s Hood is “The Third Chronicle of Brother Cadfael, of the Benedictine Abbey of Saint Peter and Saint Paul, at Shrewsbury.” Although there is some continuity in this cozy-historical mystery series, so far, at least, it seems that any one of these books can be read without the benefit of having read those preceding it. 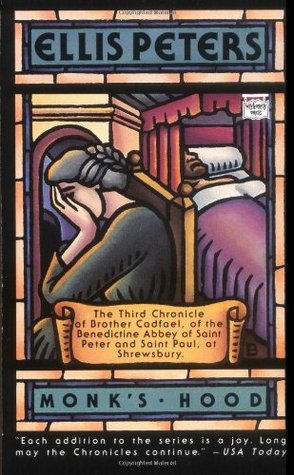 It is close to Christmas in 1138, and a family has moved into a house on the abbey property. At that time in history, one could turn over one’s estate to monasteries or convents in exchange for room and board until death. Thus a Master Bonel and his wife and stepson begin to occupy the house.

Brother Cadfael, a monk who came late to the cloistered life after a checkered career and stint in the Crusades, is now in charge of herbs and remedies at the Abbey. He is called to Master Bonel’s house when the latter is taken ill. As Cadfael tries to treat Master Bonel (to no avail, since he has been poisoned by a mixture of herbs containing monk’s-hood), he recognizes in Bonel’s wife his fiancé of forty years ago, Richildis. Richildis married someone else when Cadfael took too long to return from the Crusades. Bonel is her second husband, and now he is dead. Her fourteen year old son Edwin is accused of the murder, and she begs Cadfael for his help.

Cadfael is convinced of Edwin’s innocence as well, and resolves to help them by finding the real murderer. He is aided by his young assistant in the herbarium, Brother Mark. Cadfael likes Edwin very much, and ponders what it would have been like to have married Richildis and had children:

He solves the mystery and even dispenses justice, using his talent for detective work, his knowledge of the ways of men, his generosity of spirit, and his trademark senses of humor and justice.

Evaluation: This cozy-historical mystery is short and engaging, and a pleasant way to pass the time. The “mystery” is not so well-hidden that you can’t figure it out, but the pleasure is in seeing how Brother Cadfael, a very likeable character, goes about it.

12 Responses to Review of “Monk’s Hood” by Ellis Peters