Sunday Salon – Review of “Sisters in War: A Story of Love, Family, and Survival in the New Iraq” by Christina Asquith

This excellent and informative book offers a unique look at the war in Iraq from the often-neglected perspective of its effects on Iraqi women. It will inspire and infuriate you, but most of all, it will teach you things you will not read in treatments of the war by men.

Reporter Christina Asquith, who has written about women’s rights in Afghanistan, Oman, and Jordan, spent five years getting to know the women whose lives she chronicles in this book, which begins with the American invasion of Iraq. Zia and Nunu, young girls aged 21 and 19 at the time of the invasion, lived with their liberal parents in Baghdad. Manal Omar was an observant Muslim American woman in her late twenties who came to Iraq after the invasion to help establish women’s rights. Heather Coyne, an examiner in the White House’s Office of Management and Budget with a degree in Arabic from the Defense Language Institute, joined the army to be a part of the Iraqi liberation.

The author recounts in detail the mishandling of the invasion by the Americans: appointments were based on political loyalty to the Bush Administration rather than competence, experience, or facility with Arabic; emphasis was placed on establishing an immediate democracy without any consideration to groundwork or more pressing needs (Americans seemed oblivious to the fact that Iraqis were more concerned with safety, schools, medical care, and which form of Islam would be hegemonic rather than with forming “democratic” organizations); troop levels were too low to ensure order among the simmering tribal and religious rivalries that had been held in check by Saddam; and many hired contractors were lowlifes who needed to get out of the U.S.: they often built shoddy facilities knowing there was no rule of law to stop them, and they threw their weight around in an offensive manner with respect to the locals in general and woman in particular.

The repercussions of the war on women have been horrific. Much of it can be attributed to the breakdown of authority and subsequent sectarian violence between Shia and Sunni sects and the Islamic fundamentalists within those sects. Women had been used to a measure of freedom under Saddam. Now, those who went out without head scarves, who wore blue jeans, who studied at the university, or worst of all, who got jobs with the Americans, were considered fair game for rapes, kidnappings, beheadings, and vengeance on the rest of their families. Women became afraid to leave their homes. Programs for women emphasized teaching them democracy and getting them jobs. But it was more important to the women that their husbands have jobs first. Lynne Cheney, wife of the Vice-President, headed up an organization to help women in Iraq, but it would not even meet with any women who were considered left wing or critical of the United States. This practice omitted a great many women who were talented organizers and also sensitive to the needs of Iraqis. 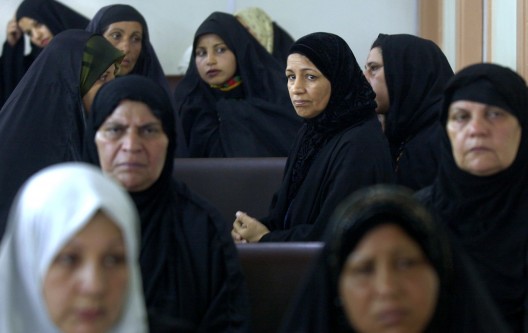 A few women, like Manal and Heather, and some others who were reported on by Asquith but who were killed, lobbied extensively for just a small portion of financial support and security for centers for women, especially centers that could be safe havens from violence. The male-dominated American establishment for the most part left the women to sink or swim. In the case of the very few gains, they claimed credit for them even though they had left the women on their own.

Asquith laments that much of the Iraqi-on-Iraqi violence that targets women goes unreported in the American media. This not only has allowed the practice to continue without an international outcry, but also allowed the Bush Administration officials to interpret the situation for women in a very positive light, which just wasn’t justified.

By the book’s end in 2009, Zia (who once only narrowly escaped being beheaded in Iraq) has managed to survive largely intact by emigrating to the U.S.; Nunu almost had a nervous breakdown and considered suicide; Manal was almost killed; and Heather suffered from Post-Traumatic Stress Syndrome.

Evaluation: There are so many things I would want to report from this book (just ask my husband, who had to listen to my rants while I was reading it!), but in the interest of brevity, I will just say: if you are a woman, and you plan to read only one book on the lives of women under Islam fundamentalism, or if you want to see war from a whole new perspective than the usual one delivered by male (generally white, western) authors, this is an excellent choice. I should also add, this is not by any means an anti-American screed, nor is it an indictment of the Muslim religion. Rather, it seeks to point out abuses that can happen when lawlessness and politics govern a country, and emphasizes that in situations of war, women are often the first victims.

The author with a family in Basra, Iraq

Note: The author’s website contains more information and suggestions for ways to help the women of Iraq.

16 Responses to Sunday Salon – Review of “Sisters in War: A Story of Love, Family, and Survival in the New Iraq” by Christina Asquith