Review of “Savvy” by Ingrid Law

This engaging book for younger teens is a coming of age story narrated by Mississippi, or “Mibs,” Beaumont, who is about to have her thirteenth birthday. Thirteen is the age when her family members find out their “savvies,” or special talents. This talent is more than just a knack, however; her brother Rocket activates electrical circuits; her brother Fish can roil up the weather into some fierce storms; and her mother has the savvy of being “perfect.” Each of them has to learn to keep the savvy under control, or in other words, to “scumble” it; this is part of growing up. As her mother told Mibs, “…a well-scumbled savvy gives you clarity and control….You have to let your own know-how, your own unique color, shine through as a something-special others can’t quite put a finger on.” But it’s not as easy as her mother made it out to be, judging from the problems her older brothers have had with scumbling. Moreover, Mibs’ father is a “normal” person, and Mibs worries that she will inherit his lack of savvy. 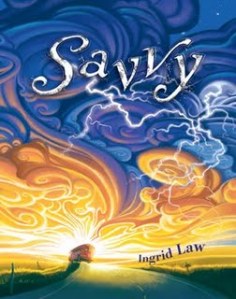 The family lives in a place the kids call “Kansaska-Nebransas,” an area in between the two states. Right before her birthday, Mibs’ father is involved in a terrible car accident and goes into a coma. Her mother and Rocket rush to the hospital. Shortly afterwards, the preacher’s wife arrives to take care of them, bringing along her own teenaged boy and girl, Will and Bobbie. On her birthday, Mibs convinces the other kids to stowaway with her on a bible bus to get to her dad at the hospital in Salina so she can apply whatever her savvy is to wake up her dad.

Mibs’ savvy, as it turns out, is the ability to hear people’s inner voices (or thoughts) if they have ink on their bodies, such as tattoos. In order to “scumble” this savvy, Mibs has to learn how to separate out the voices she hears: blocking out the bad, making use of the good, and recognizing and respecting her own voice from out of that jumble.

This book is a rather obvious derivation of “The Wizard of Oz.”

It begins with a hurricane (comparable to a tornado) that takes the family to rural Kansaska-Nebransas. Twelve-year old Mibs (similar to twelve-year old Dorothy) leads the characters on a quest, first to the town of “Emerald,” where they encounter “The Great and Powerful Ozzie.” The driver of the bus on which they stowaway, Lester, is constantly bombarded with two witchy voices in his life that tell him he is inadequate. He needs to find courage. He is aided by a “good witch” they pick up along the way, Lill. 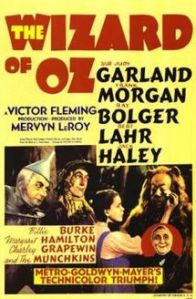 More overt references are sprinkled throughout the text:

“I felt selfish and shamed and bad enough to have a house come land PLOP down on me, leaving nothing but my feet sticking out; that’s just how wicked I felt.”

“I was starting to feel low on heart, and my brains and bravery weren’t so sure either. Fish and I weren’t in Kansaska-Nebransas anymore and we didn’t have any yellow bricks to guide us…”

These allusions to “The Wizard of Oz” are fun and might help teach younger readers about symbolism and metaphor. (Uses of metaphor abound in this book, from Fish’s “storms” that he needs to control, to Rocket’s “electricity,” to Momma’s “perfection.”)

There are also many lessons for readers imparted by Mibs as she confronts growing up, from learning to let one’s own voice be in control instead of those of detractors; to waiting until one is ready to start romance; to realizing that, as Lill said, “You never can tell when a bad thing might make a good thing happen.” Mibs also comes to understand that even those who don’t have magic savvies still have a special knack for something.

Evaluation: Normally I don’t like books with supernatural elements, but this cute book is not really about magic. It offers lots of thoughtful concepts for teens, and very engaging characters. I liked that the ending was not sad, but not perfect; rather, it was realistic and heart-warming. Recommended for the suggested age group of 9-12.

8 Responses to Review of “Savvy” by Ingrid Law