Review of “Moby Dick” (on CD) by Herman Melville, Narrated by Frank Muller

Note: This review is by my husband Jim.

Call me impressed. The blurb on the jacket of this audio book calls it a “breathtaking masterwork,” but actually, it’s better than that! It is an epic and staggering tale every bit as big as its subject matter–the largest of all living creatures and the edacious, relentless men who hunt and kill them. 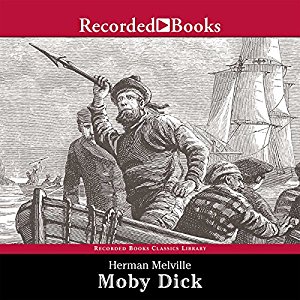 Melville’s language is grandiloquent and a bit archaic, almost like the King James Bible. Although some might find that pretentious, I think it works in its context. My experience of the book may even have been enhanced by listening to it rather than reading it: the language is so elevated that, like a Shakespearian play, it is more moving when heard than when read. Melville says somewhere near the end of the book that one should write big stories about big subject matters, not about small things. And indeed, this book is not about mice or fleas; it is about whales and whaling.

Moby Dick was first published in 1851. The plot is familiar to most; beginning with the first sentence “Call me Ishmael” to the obsessed quest by Captain Ahab on the whaleship Pequod to catch and kill the whale that severed his leg, this story has been swimming through the culture in every medium from music to movies (including adaptations like “Jaws) and television. 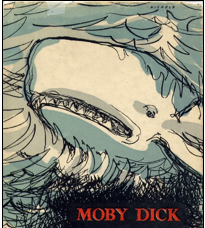 Melville can be forgiven for utilizing a sprinkling of omens and preternaturally prescient shamans, reminiscent of Shakespeare’s witches, to create a foreboding atmosphere. His characters were superstitious and would have attributed such portentousness to ordinary coincidences. And what wonderful characters they are! Dickens himself would have been proud to have limned them, especially the “pagan savages,” the harpooners named Queequeg, Tashtego, Daggoo, and Fedallah.

This is not just a novel. It is also an encyclopedic treatise on the subject of whales and whaling, relating not only what scientists of the time knew, but also much of the lore (obviously exaggerated, but in many ways more interesting than the truth) prevalent in the fishery.

In the performance to which I listened (“Unabridged Classics” on 18 CDs), Frank Muller did a superb job of mastering accents and employing different voices for different characters. This book sets a very high standard for other fiction. It deserves its rating as one of the greatest novels in the English language.

12 Responses to Review of “Moby Dick” (on CD) by Herman Melville, Narrated by Frank Muller