The author set out to read the entire Oxford English Dictionary in one year. The OED, Shea explains, is not just a dictionary; with its etymologies and usage examples from great literature, it also recapitulates the entire history of the modern English language. And it is fairly thorough: in its 21,730 pages it features the meaning, history, and pronunciation of over half a million words. The letter S takes up four volumes alone – more than 3,000 pages. The most recent print edition fills twenty volumes and weighs 137.72 pounds. 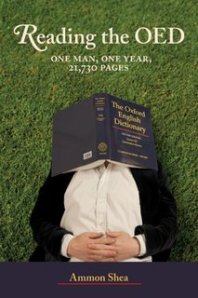 Shea loves his dictionaries. He arrays them along his wall, “all dust-jacketed in dark blue, with a regal and chitinous gloss, resembling the covering of some beautiful and wordy beetle.” When reading them, he claims to find “the entire range of emotions and reactions that a great book will call forth from its reader … they just happen to be alphabetized.”

The chapters are organized alphabetically, with a brief survey of word selections from that letter in the OED preceded by some background notes and an accounting of how the author is surviving the reading process. He supplements his selection of favorite words and their definitions with his own elucidations, such as these entries:

Accismus (n.) An insincere refusal of a thing that is desired.
As in: “No, please, I really would like for you to have the last donut.”

Mythhistory (n.) A mythologized account of history.
In other words, history.

What is the longest entry in the print version of the OED? It turns out to be the word set, which has 155 main senses as a verb, nine as an adjective, 48 as a noun, and one as a conjunction. In the online version, make is the largest entry (because of the greater ease of electronic updating). Shea also makes the interesting observation that the letter W is qualitatively different than other letters: since there is no such letter in ancient Latin, the vocabulary of W is overwhelmingly Anglo-Saxon. He notes that reading W is like reading another dictionary! 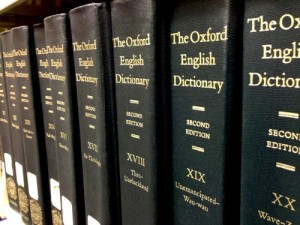 I had high hopes for a book that begins with “Exordium (Introduction),” but ultimately I was disappointed. The author’s wit at the beginning of the book gives way to a litany of complaints including headaches, blurry vision, endless cups of coffee, and jeremiads against people who talk when he is trying to read. An inordinate number of his word commentaries have to do with how obnoxious other people’s children are.

I would give the book 3 stars out of 5. If nothing else, it may help cure you of onomatomania (vexation at having difficulty in finding the right word).